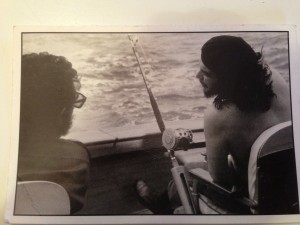 As I’ve been out and about talking about Havana Lost, it’s struck me how little people really know about Cuba. As a result, I thought it might be a good idea to write a few blog posts about the island. I’m not an expert, but I have read a lot about Cuba’s history, culture, and I spent ten days there. If you haven’t read Havana Lost yet, perhaps these posts will give you some background that will make the book more enjoyable. So, welcome to “The Cuba Files.”

A short history of Che Guevara

For the first “Cuba File,” I’m taking a quick look at Ernesto Che Guevara, the man who personifies Cuba for many people, and a true legend, especially for the Radical Left during the late Sixties.

Curiously, Che is from Argentina, not Cuba, and he was educated and trained as a doctor. As a young medical student he traveled through South America, a journey which radicalized him as he experienced first-hand the region’s endemic poverty, hunger, and disease. This led him to eventually become a Marxist revolutionary, author, guerrilla leader, and military theorist.

He met Fidel and Raul Castro in Mexico City where, as Wikipedia says:

(He) joined their 26th of July Movement, and sailed to Cuba aboard the yacht, Granma, with the intention of overthrowing US-backed Cuban dictator Fulgencio Batista.[10] Guevara soon rose to prominence among the insurgents, was promoted to second-in-command, and played a pivotal role in the victorious two-year guerrilla campaign that deposed the Batista regime.

In fact, Che is essentially credited with winning the revolution. In Havana Lost, I talk about how he derailed a train that was filled with military troops and ammunition in the city of Santa Clara. Even though Che and his band of rebels were outnumbered, the army basically surrendered rather than fight. This prompted Batista’s flight out of Cuba on New Years Eve and allowed Fidel to ride victoriously into Havana a week later.

Today, sixty years later, Che is treated with the reverence of a patron saint. In a country where there’s very little commercialism, Che’s likeness is EVERYWHERE… on 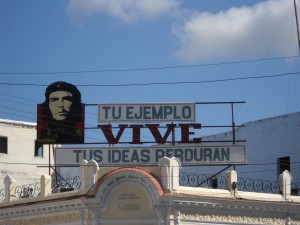 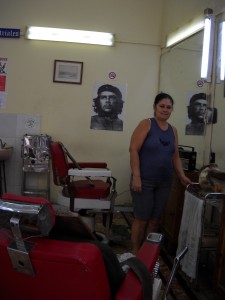 walls, books. They even sell his signature beret on the streets.

His image is almost more hallowed than Fidel, of whom you rarely see photos in Cuba, probably because Che is dead and Fidel isn’t… yet.

After the Cuban Revolution, Che held key roles in the new government, which included signing death warrants (by firing squad) for “convicted” war criminals. He also drove agrarian land reform as Minister of Industries and took on roles as Cuba’s National Bank President and Instructional Director of the country’s armed forces. He married a Cuban, for the second time, and had four children. His daughter, btw, has since written a book on being the daughter of Che.

But Che’s fame had repercussions. He and Fidel, along with Camilo Cienfuegos, had been considered the “Three Musketeers” of the revolution, and they were soul mates. After the revolution, though, things changed. Cienfuegos died in a mysterious plane crash a few months later, and Che and Fidel grew apart. In fact, it’s said that Che became disillusioned with Fidel ad his brand of leadership, to the point of contemplating an insurrection.

That never happened, but Che grew increasingly restless. In 1967 Fidel decided to get him out of Cuba, and decided he should go on a mission to export Cuba-style revolution and Marxism to other countries. Che went to Bolivia, where— gee, wouldn’t you know it—he was caught and executed in the jungle by CIA-assisted Bolivian forces.  I wonder how they knew where he was. Did Fidel betray his best friend in order to consolidate his own power? Who knows? Maybe the conspiracy theorists have it right.

Che’s desire to overturn what he saw as the capitalist exploitation of Latin America by the US could have been his undoing. Which is when he, even more than Fidel, became an icon of the radical left in the US and beyond. I’ll never forget when I worked at an underground newspaper in Washington, D.C. The editorial staff always spoke his name with awe. And millions in Cuba still seem to do the same. Che pervades almost every area of Cuban life.

Your turn now. When you hear the words “Che Guevara,” what comes to mind?