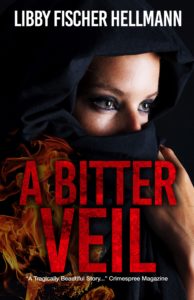 A Bitter Veil tells the story of Anna and Nouri, both studying in Chicago, who fall in love despite their very different backgrounds. Anna, who has never been close to her parents, is more than happy to return with Nouri to his native Iran, to be embraced by his wealthy family. Beginning their married life together in 1978, their world is abruptly turned upside down by the overthrow of the Shah, and the rise of the Islamic Republic.

Under the Ayatollah Khomeini and the Republican Guard, life becomes increasingly restricted and Anna must learn to exist in a transformed world, where none of the familiar Western rules apply. Random arrests and torture become the norm, women are required to wear hijab, and Anna discovers that she is no longer free to leave the country.

As events reach a fevered pitch, Anna realizes that nothing is as she thought, and no one can be trusted… not even her husband.

In July, 2014, A Bitter Veil was translated into German as Bitterer Schleier. It is available in both print and ebook formats and can be found here.

Anna was deeply asleep, which was unusual for her. She generally tossed and turned until the desperate hours of the night passed. But tonight she’d succumbed almost immediately.

The first knock seemed like part of a dream, and her brain started constructing a story around it. As she swam up to consciousness there was another knock. The sound left a residual imprint in her ears, and for an instant she tried to figure out its intent. Was it an angry thump? A frightened plea? A perfunctory tap? She checked the clock and grew immediately wary.

She threw the covers aside, grabbed her chador, and draped it over her baby doll pajamas. Nouri was not home. After what had happened earlier she wasn’t surprised, but it meant she had to answer the door. Still, she hesitated. Whoever was there would see her sharp features, pale green eyes, and blonde eyebrows. They would know she wasn’t Iranian. They might even suspect she was from the decadent West, perhaps the Great Satan itself. And if that happened, whatever mission brought them would be tainted with that knowledge.

She carefully pushed the curtain aside and looked out. It was summer in Tehran, a hot, arid time that reminded her of the dog days of August in Chicago. She and Nouri lived on an upscale street in Shemiran with walled-off houses set back from the road. At this hour the street was quiet and dark, save for a black Mercedes parked by the gate. The engine was off, but its headlamps were still on, and two precise beams of light illuminated tree trunks and overgrown bushes.

Three uniformed men, all bearded, crowded the door. One had his hands planted on his hips. The other two stood hunched over, arms folded around machine guns. Somehow they’d been able to break through the gate. Fear pumped through her veins. Revolutionary Guards. She had no choice. She had to open the door. If she didn’t, they would break in, claiming knowledge of crimes she’d committed against Islam and the Republic. They might confiscate her books, her makeup, and Nouri’s stereo, for starters. She didn’t need that. Not now. Not with all the other troubles.

She padded out of the bedroom in her bare feet. Clasping the folds of the chador under her chin, she took the steps down, cursing inwardly at the garment’s awkwardness. How could any woman manipulate the yards of heavy black material without feeling clumsy? When she reached the first floor, she slipped into a pair of black ballet slippers she kept by the door. If the Guards saw her toenail polish, they could report her.

She held the chador with one hand and opened the door with the other. One of the men’s hands was high in the air, as if he was just about to knock again. He stepped back, looking startled.

She gave him a curt nod.

“You are the wife of Nouri Samedi?” he asked in Farsi.

Her heart caromed around her chest. She and Nouri had argued viciously, and he’d threatened to have her arrested. Is that why they’d come? She nodded again, more uncertainly this time.

The men appraised her. Women were supposed to keep their eyes down in the presence of men, to be submissive and quiet. But men had no such limitations, especially Guards. They were free to ogle. Make demands. And if those demands were not met…she shivered, recalling the stories she had heard.

One of the other men stepped up to the door. His lips curved in a predatory smile. She tightened her grip on the chador, for once thankful it covered her body. If she was back home, she would call the police, report them as intruders. But here these intruders were the police. Or what passed as security.

“Your husband…” he said, his voice dripping with scorn. “Do you know where he is?”

She shook her head and looked at the floor. Oh god, were they going to beat her up? She knew people who claimed they were beaten during nighttime visits by the Guards.

“You are certain you do not know his whereabouts, Sister?”

She stole a look at him. His smile had disappeared, replaced now with a scowl. “You have been home all night?”

She nodded. She never went out much, certainly not alone.

His eyes narrowed in disbelief.

“What is it? Has something happened?”

Always the charades. The brinkmanship. Anger roiled her gut, but she could not show it. “No.”

“Your husband is dead. His body was found in an alley nearby. He was stabbed.”

She gasped. A steel gate plunged down the center of her brain, separating her emotions from her thoughts. She wished she was wearing a burqato hide her face as well as her body. Her jaw dropped open. Through her fingers she heard herself cry out, “No!”

Despite the Supreme Leader’s admonition to limit eye contact between the sexes, the men stared hard at her. If she were Iranian, she would cry out, collapse, even faint. But she was an American, and Americans were not demonstrative. Odd to be thinking of cultural differences at such a moment.

She drew a ragged breath. “That cannot be,” she lied. “He was with his friend Hassan tonight. Hassan is a Guard,” she added, as if that gave her legitimacy. “He said he would be home late, because—”

“We have notified his family. They are coming to identify the body.”

What game were they playing? She was Nouri’s family. But she said nothing. At least they do not call her on her lie.

The man who’d been talking suddenly shoved the door open wider and barged in.

Panic tickled Anna’s spine. “What are—where are you going?”

He and another Guard pushed past her and went into the kitchen. She started to follow them, but the third man aimed his machine gun at her. “Stop,” he barked. “Don’t move.”

She heard murmurs from the kitchen. Then a cry of triumph.

The first man returned from the kitchen, brandishing a steak knife. She and Nouri didn’t eat much red meat, except lamb—in kababs and meatballs, but she’d brought the wooden block of knives from the States with her when she came. It reminded her of home.

“There are only five knives,” he said. “Where is the sixth?”

She stiffened. “I don’t know what you’re talking about.”

He nodded and the man with the machine gun shoved her into the kitchen.

He was right. She turned to him. “It’s been missing for a while. I don’t know where it is.” She bit her lip. A weak excuse. They could tell.

A victorious smile curled his lips, as if he knew he’d won. “Ah, but we do. We have it. It was the murder weapon. You murdered your husband. Killed him so you could escape Iran and return to America. Now you will never leave. You will die in Iran, just like your husband.”

Hellmann crafts a tragically beautiful story around a message that is both subtle and vibrant. The author does an amazing job of delivering her point but never by sacrificing the quality of her storytelling. Instead, the message drives the psychological and
emotional conflict painting a bleak and heart-wrenching tale that will stick with the reader long after they finish the book.

The Iranian revolution provides the backdrop for this meticulously researched, fast-paced stand-alone… A significant departure from the author’s Chicago-based Ellie Foreman and Georgia Davis mystery series, this political thriller will please established fans and newcomers alike.

Readers will be drawn in through the well-researched inside look at Iran in the late 1970s and gain perspective on what the people in that time and place endured. A Bitter Veil is so thought-provoking that it especially would be a great title for book clubs to discuss.

Certainly there have been other books written about this time and place in history, but A Bitter Veil is one of the best.

Well-drawn characters have always been a hallmark of Hellmann’s writing, and here she’s as strong as usual… [a] suspenseful, well-researched book.