I never thought I’d be starting my own blog. For over five years, I was part of the Outfit Collective, and I was happy. But times change. And the Beatles claim that if you say the word, you’ll be free. Don’t believe them? Click on the cover of Rubber Soul.

Add to that the fact that George Harrison said five words to me, and Paul played at a party I attended—well, okay, it was Wrigley Field and a few other people were there, too—nonetheless, I’m a believer.

So here I am. And so are you. I probably don’t need to tell you what we’ll be doing.  You know. But I’ll say it anyway. No matter what we share… or how we tell our stories… we use  words. And when we choose the right ones, the most expressive ones, we are free.

I’m going to try and do that, and I hope you’ll join me. Rant, review, rave, analyze, tell me YOUR stories and news. Please. Otherwise it will be pretty lonely over here. I’ll start… with the back story to my latest novel, TOXICITY. 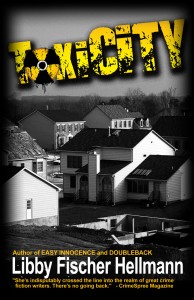 A funny thing happened on my way to publishing this novel.

I published seven others before it. Btw, for those of you who don’t have a clue who I am, I usually introduce myself as the best author you’ve never heard of. I’ve published eight crime novels and number nine will be out next spring. I’m a hybrid – I’ve published both traditionally and independently.

In fact, TOXICITY is the first novel I’ve ever self-published. But it wasn’t the first novel I wrote. It was the third. Back then, though, self-publishing wasn’t a viable option. So, after I finished my second novel (the first will remain forever in the trunk collecting dust), I sent out lots of query letters and managed to snag an agent. A New York agent.  With a  reputable agency.  You can imagine my joy. And my confidence. I was pretty hot stuff.

The agent tried to sell that second novel for six months. Unfortunately, he didn’t succeed. But by then I’d written a sequel (the novel that became TOXICITY). So when he called to say he didn’t think he could sell my novel, I replied cheerfully.

“I don’t think you understand,” he replied. “I don’t think I can sell a book with these characters. I think you need to change them. And change your plot. And your voice. Your agent, too, because I don’t want to represent you anymore.”

After a few bottles of wine and a lot of tears, I eventually picked myself up off the floor and followed his advice. The fourth book I wrote, AN EYE FOR MURDER, featured a brand new protagonist, Ellie Foreman, and became my first published novel. With a new agent. I went on to write three more books in that series.

But the characters in the books that were rejected still haunted me. Characters like Georgia Davis, Ricki Feldman, and Matt Singer.  So I cannibalized them. Especially Georgia. She and Ricki Feldman made their first “official” appearance in AN IMAGE OF DEATH, one of the Ellie books. Then Georgia had her own series. Ricki came back and so did Matt in EASY INNOCENCE.

Bringing them back was the kiss of death for the earlier books, I thought.  Until I was procrastinating one day  (I do that a lot) and started re-reading that third book. The story wasn’t half bad, I realized. It needed polishing. Rewriting. Updating. But maybe… just maybe… I could bring it out as a prequel.

So I eliminated 20,000 words. Changed the title. Got it edited. And published it on Kindle, Nook, and Smashwords.

The moral? There may be something to getting fired by your agent.