“Character is plot and plot is character” F. Scott Fitzgerald.

Now and again a character steps onto the page and explodes into life. In fact they seem to write themselves. Ellie Foreman’s (the protagonist in my first series) father, Jake, is like that. I never have to worry when he’s around. He always does or says something unique, even compelling. Unfortunately, that doesn’t happen all the time.

So what can an author do to increase the odds of it happening? I like what Fitzgerald says about plot being character and character being plot. It fits with my experience as a writer. The method I use helps flesh out my characters, but it also helps drive plot.

I use character backstories. Not for everyone who appears in a book, but for the most important characters. It helps me define them and often gives me plot ideas as well.

First I determine who the major characters are; there are usually three or four. Then I enter a sort of ‘stream of consciousness.’ I let my subconscious mind explore every aspect of their lives and write it down. This includes a detailed background that drives the way they think, feel, act and react. I touch on their education, family background, personality, pets, friends, reactions to specific events, upbringing, schooling—in other words, just about everything. I just let it fill the page. I pay no attention to how it sounds; it’s just data at this point. I also include a couple of incidents from the character’s youth that helped shaped them as adults. This can be really powerful stuff, helping me create characters with depth and the right amount of flaws.

I might falter a bit at first, until I get into the flow. But at some point the blockage breaks down and it comes naturally. It usually ends up to be two or three single-space pages.

The key is that I probably use only two to five percent of the backstory in the book itself. However, the intimate knowledge I have built about each person means I can anticipate their beliefs, dysfunctions, and behaviors. And when I present them with plot conflicts, obstacles, or choices (Hobbsian or not), I usually know what they’re going to do.

I said “usually” above. That’s important because the other point I keep in mind is to allow my characters to change; to do the unexpected. For example if readers think someone’s a bitch, she’ll do something noble. Take Ricki Feldman, a recurring character in both my series. Just when you think it’s okay to hate her, she’ll do something heroic, or reveal her 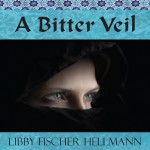 vulnerability in a way that makes it impossible to cross her off completely. Or Hassan, in A Bitter Veil, whom readers think has swallowed the Islamic Republic’s propaganda whole, but ultimately risks everything to help Anna. These unexpected choices and behavior not only drive plot but reveal whether a character is a hero or a coward.

However, the process isn’t as simple as it sounds. While I do want characters to change and surprise readers, their actions have to be authentic and believable. Ricki Feldman, a sharp realtor who sometimes cuts corners, wouldn’t suddenly decide to go to, say, nursing school. And Hassan, a values-driven character at his core, has simply decided to honor a different set of values when he changes course. In fact, if a reader ever thinks “She wouldn’t do that…” and throws my book against the wall, I’ve failed the “authenticity” challenge.

Even minor characters need to feel real. I may not write backstories for them, but I still need to get into their heads. How do they think, what do they see, what kind of words do they use? That’s where dialogue and telling details help.

Some tips about creating powerful characters

Those are the main things I turn over when I’m developing character. But here are some tips you might find useful as well.

Who are some of the seminal characters in crime thrillers? Why? Are they characters you love to hate, or love to love?