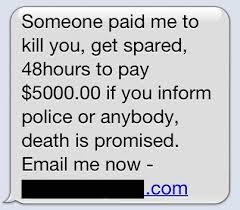 So, I was opening my email a couple of mornings ago when I saw a message from a stranger, saying someone wanted to kill me. Luckily, this person knew who it was, and if I sent him $4,000 right away, he would take measures to protect me. Oh, and I shouldn’t call the cops if I wanted to save my own life.

Now I know about the Nigerian email scam. I also know the “I’m-stuck-at-the-airport-with-no-money” scam, but I have never received a death threat before. Maybe a couple of really scathing reviews, but never someone threatening my life. The sender did have an Arabic name, and I have written novels that dwell on Arab terrorism, so even though email was totally impersonal, I was somewhat disturbed.

The first thing I did was call my friendly neighborhood police detective.  I said I wasn’t that worried, but I did want them to know about it. He promptly told me to come in, and that he had someone on staff who specialized in email scams and hacking.

I took a copy of the email, with the headers visible, into the police station and met the hacker detective, a young guy who turned out to be quite knowledgeable. The first thing he said is that “assassination” scams have been out there since 2006.

Then he tracked the sender, and was able to associate his name with other hacker and scam websites and organizations.

Finally, he tried to trace where the email had originated, but he only got as far as Argentina. Argentina? I had no idea it was such a hotbed of scams. Unfortunately, at that point, encryption systems by Yahoo and Google kicked in, and he was stuck, unless we issued a subpoena. I said not to bother, although he was sure it would ultimately lead back to a server in Europe or the Middle East.

The good news? It’s just a scam. The bad news? It was pretty disturbing. But it turns there is a way to report them. The police recommend filing a complaint at the Internet Crime Complaint website.

So, from the learn-something-new-every-day department, now you know as much as I. If you want to know more, read this, this, and this.

Have you ever received one of these death threats? If so, what did you do?