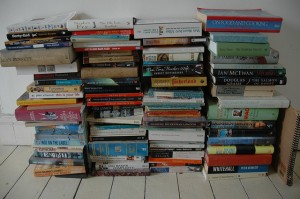 You know how Bill Maher has his New Rule shtick? Well, I’m taking a page from his playbook. Many of you aren’t going to like this, but I think it has to be said: STOP publishing all these ebooks. I don’t want to sound negative, but it’s getting nuts out there. Ever since the self-publishing floodgates opened, “the more the merrier” has been the rule of thumb for indie authors. If you’re not making the sales you want, just write a new book and publish it. Add to your series. Start a new one. That’s the way to boost sales. I know people who are publishing five or six books a year! Which is why I call it Binge Publishing. (Btw, I’m talking about new books here, not backlist novels. Will deal with them later.) Who came up with this notion? What expert, exactly, figured out that the best way to sell more is to write more? While it’s true that books are viewed as fungible commodities, that’s nothing new. When I started in this business as a traditionally published author, it was clear that if my books didn’t sell well, there were three or four other enthusiastic authors waiting to fill my shoes with their “product.” My novels were eminently replaceable. But whoever said one novel should be replaced by five is wrong.

A few wise authors are beginning to realize the ‘write more’ theory is flawed. In fact author Mike Dennis admitted just that on the KBoards Writers’ Café, an online forum where a lot of self-published authors hang out (including me). His post was promptly followed by advice from others urging him to market and promote differently, write MORE books, or write in a different “hot” genre. However some of the authors in the forum did acknowledge reality. V.J. Chambers was one: “You know what amazes me? Here we have clear evidence that the ‘formula’ is not a formula after all, and there is no guarantee of success in this business. Basically, that the universe as we know it is entirely uncertain. And yet, in these comments, people still want to find some way to make the formula work. People keep trying to figure out why it’s not working. Here’s the reason: There are no guarantees. Everything is uncertain. There’s no surefire path to success.” Amen to that. Here’s why…(at least IMHO)…

The craft of fiction

Many people still think they know how to write a great novel from day one. Some even sell a bunch of books, which I think confers an inflated sense of talent. The craft of writing isn’t something you automatically ‘get’ fresh out of the gate. It comes with practice. 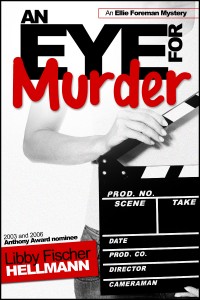 My fourth book, AN EYE FOR MURDER, was the first of my books to be published, and I still have the other manuscripts in a drawer. Why? I needed to learn the craft of writing fiction. For example, a writer needs to learn narrative and dialogue, how to create suspense, build a believable setting, perfect the choice of language, use point of view correctly. We learn over time. If you are writing a lot of books, say six per year, you have little time to develop your craft. You’re too busy churning out “stuff.” And, please, don’t tell me your editor will “fix” it. Like authors, the pool of editors who will take your money has multiplied too. And judging from the results, many of them don’t understand craft that well either. Like it or not, half-done books pollute the stream for everybody else. Which is why we hear that so much self-published writing is crap. Hey, I understand. When I finished my first book, I thought it was fabulous. The two agents who turned it down were polite, saying things like “it’s not what we’re looking for.” I realized later that was code for, “girl… go learn how to write!” I cringe now when I look back at that first attempt. And I don’t think I’m that different from other writers. Bottom line: over the long haul, it’s self-defeating for you and for everyone else, to publish sub-standard work.

Let’s face it. With over a thousand self-published books hitting the virtual shelves every day, the market is flooded. You’ve heard the figures: only about 10% of what’s available is read, even if it’s sold. At what point will we realize this is an unsustainable model?  What happens when readers conclude it’s too overwhelming to browse the digital “stacks?” In a way, they already have. “Discoverability” is the new buzz word these days. Websites that profess to curate books for readers either by subscriptions or other means have popped up like mushrooms after a rain. It’s a problem, btw, that affects not just indie publishers, but traditional publishers as well. And some of these services are, at least anecdotally, seeing flatter yields. Take BookBub, which used to get fabulous results for authors. (I’m not talking about free books, which probably deserve a blogpost of their own—but books on sale for $.99 or more.) The number of books sold after a BookBub ad has slowed, at least for me and other authors I’ve talked to. The same is happening with books on ENT and Pixel of Ink. Why? Because the sheer volume of promoted books is just too much for BB’s subscribers. The market has become so cluttered that even sophisticated discoverability tools are growing sluggish.

And yet, even traditionally published authors are being pushed to publish more than one book a year. As Jeffery Deaver said in the October RT Book Reviews: “The problem I have now is … one of endurance. I’ve got so many ideas for novels, I don’t have the energy to write them as quickly as I used to. This year I did two books and it was exhausting!” There’s an old story in the mystery community about a woman who had a full time job but was writing a novel on the side. It took her about a year, so she went part time to see if a less demanding job could help her write faster. It still took her a year. So she quit her job altogether, thinking she could write even faster… but it still took her a year. The point is, it often takes that long to figure out what your book is about, what you’re trying to say, and how to say it. The process itself is part of what makes a writer an author. I’ve got to wonder whether the demand for new work is so insatiable that authors need to push themselves. Do publishers and writers really think readers won’t flock to your next book if you wait a few months?

What happened to anticipation?

Every July I look forward to a new Daniel Silva book. Every fall I anticipate a new Sara Paretsky. It’s a celebration, an event, kind of like anticipating a new season of Homeland. Why are we taking that pleasure away from our readers? Why not make your release a celebration, a thrilling event people are happy to wait for? If you launch with a flourish, you might even get more attention for your “baby.” Okay, before you climb all over me, let’s explore the possibility that you really are a fast writer, and have so many ideas you can’t possibly rein them in. Go ahead. Write four books a year. Then put them away for a few months. And then edit or re-edit. There isn’t a book around that can’t get better over time. And before others tell me how bone-headed I am and how your sales have just exploded because you’re writing so many books, good for you. Let’s talk again in a year. Someone on KBoards called Mike Dennis’s thread the “Most Depressing Thread of 2013.” I don’t agree. I think it’s one of the first times we’ve had an honest discussion about self-publishing. It’s been long overdue. I realize I’ve only scratched the surface here, but I’d love to know your opinions. Don’t hold back. I didn’t.