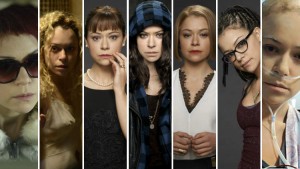 Suddenly Orphan Black is the most talked about show on TV. For the uninitiated, Season three started Saturday night on BBC America, and it promises to be even more complex (maybe even a little unwieldy) than the past two seasons. I’ve been watching it since the beginning, and I’ve been a big fan. Part of this post is a redo of a post I did last summer, but now that the rest of the world has discovered OB, it bears repeating why I like it so much.

Why, you ask? Because the story, the film-making, and most of all,the acting are superb. Possibly better than Mad Men and Homeland, my other not-to-be-missed shows. Orphan Black is part corporate conspiracy, part sci-fi, part romance, and all-around suspense thriller. 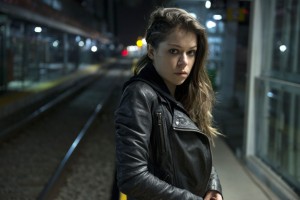 Its premise centers on a youngish female grifter, Sarah Manning, who assumes the identity of a look-alike cop who has committed suicide. It turns out Sarah has bumped into a scientific experiment with clones, of which she is one of nine—and possibly more. Actress Tatiana Maslany plays all the clones, and that’s where the magic begins.

Every clone character Maslany plays is extraordinary. Not only does she imbue each character with their own personality, but her accents, physicial mannerisms, and facial expressions are unique to each character. She does this with such ease and professionalism that I never once got the feeling she was “impersonating” a character. Each of the women are nuanced individuals. Whether she’s scientist Cosima, soccer mom Alison, or crazy Helena, Maslany invests herself  in each role. I had no trouble knowing and believing in the credibility of each character. That’s how good she is. 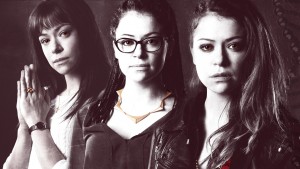 And when they’re talking to each other in the same scene—well, that’s when the technical wizardry of the film-makers comes in. Never once did I see a clumsy double pasted into a scene. The superimpositions were done seamlessly which shows (at least to me) a mastery of form and craft. And, btw, the opening titles are visually magnificent.

The story is quite dark, and Season Three promises to continue that mood. The show is often violent, but just when you think you might need a break,

comic relief appears, usually through Sarah’s foster brother, Felix, who is superbly played by Canadian Jordan Gavaris (In fact, most of the actors are Canadian)… and Alison, the perfect soccer mom, who has a hilariously noirish edge.

BBC America produces the series, which is shot in Canada, and Season 1 and 2 are  on Amazon, if you’re in Prime.

Now for the most important question. Who is your favorite? There’s Sarah, of course, always dark and brooding; Cosima, the brainy scientist with dreadlocks and a perpetual smile; Helena, childlike but mentally deranged and dangerous; Alison, the suburban soccer Mom; Rachel, the Machiavellian corporate executive;  a cross-gender clone, Tony who may or may not be back, and new this season, Crystal.

I’ll tell you mine, if you tell me yours…