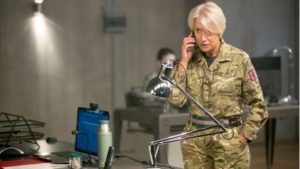 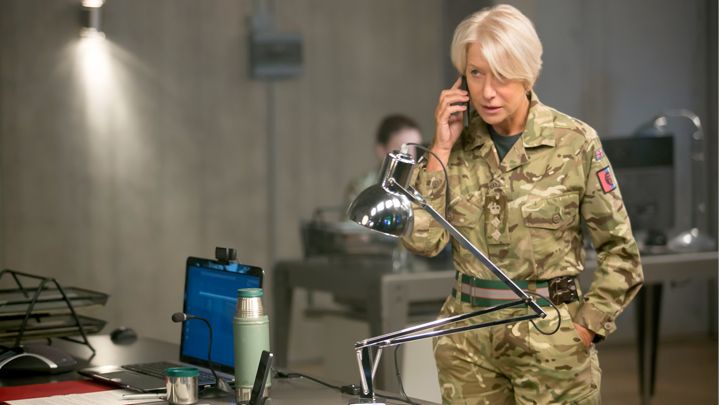 Last week I saw Eye in the Sky. I really wanted to like it. With Colin Firth producing, Helen Mirren as Colonel Katherine Powell and the late Alan Rickman, in his final movie role, as Lieutenant General Frank Benson, the signs were all good. But it fell a bit short.

The story goes like this: Colonel Powell (Helen Mirren) wants to order a drone strike to take out a group of terrorists in Nairobi, Kenya. But a young girl selling bread in the kill zone forces those involved to make dire decisions as to “collateral damage.”

The themes of the story are the legal, ethical and political dilemmas presented by drone warfare against those using terrorist tactics and the impact on civilians who are endangered by it, all powerful contemporary themes that go right to the heart of western democracy.

The acting was excellent. And it was a fascinating examination of how far Brits are prepared to go to avoid collateral damage. In fact, most of the film showed the request for the drone strike climbing up the British chain of command, ultimately crossing over to the American Secretary of Defense’s turf. I wasn’t sure we in the US would go to the same lengths, although, to be fair, I met (in a bookstore of all places) a retired US Navy captain who worked around drones , and she disagreed, claiming “the (military’s) concern for collateral damage is extraordinary.”

Still, there was something unsatisfying about the film. Was I alone? As a former film person, I thought it’d be fun to see what reviewers said. Of course, reviews are always subjective, but here we go.

The New York Times says: “It is a grim, suspenseful farce in which unpredictable human behavior repeatedly threatens an operation of astounding technological sophistication. Like many films of its type, it doesn’t dwell on geopolitical minutiae.”

The Washington Post says: “…Characters repeatedly resort to evasive, Orwellian double-speak, whether they’re issuing orders or raising objections. (At one point, the drone pilot is given clearance “to prosecute the target.”) But the purposefully innocuous language often is more horrifying or hilarious (or both) than any blunt-spoken admission of culpability, cowardice or cold-blooded calculation ever could be.” 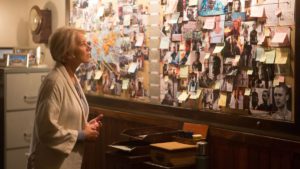 I have to confess that I missed the farce element in the film. Why? Possibly because I write thrillers myself and was too quick to label it as one…or possibly because I don’t have the sophisticated black humor of the Brits. Eye In the Sky was far more nuanced and well-acted than Dr. Strangelove. But the fact that so many reviewers considered it farce did give me a different lens through which to view the film.

I also think The Boston Globe added an important dimension to the discussion: “It’s clockwork entertainment, in the end — a precisely calibrated schematic in which every aspect of the ethical quandary balances every other aspect, and the only variable is your own moral compass.” 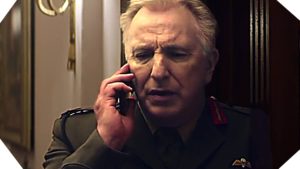 That’s why I made the comment about Americans being less concerned with collateral damage. There is that perception, whether it’s true or not. Sure, I saw (and heard) the double-speak, and, like Rickman’s character, I became increasingly frustrated by the endless “passing the buck.” Just get on with it, I kept thinking. So what does say about my moral compass? I’m not sure. But the fact that I’m still thinking about it a week later tells me that I’d like to come up with some answers.

Still, I think The AV Club says it best:

“The question is whether the oddly antic tone of Eye In The Sky, with its steadily escalating narrative contrivances…and endless double-talk—well delivered by master actors like Mirren and the late Alan Rickman—evinces failed melodrama or on-target Kubrickian farce…such ambiguity is a virtue, but for all his technical facility, Hood doesn’t really have the finesse of a great, fearless satirist. He keeps all of his angles—visual and ideological—hovering nicely for nearly two hours. But he doesn’t quite stick the landing.”

No question the process dramatized in the film was fascinating– and revealing personally as well as politically. In the final analysis, though, the ending was too predictable. Perhaps the filmmakers wanted it that way. But it did feel like a let-down.

Don’t get me wrong — it’s definitely worth your time. In fact, if you’re looking for something to do this weekend, go see it. And let’s continue the discussion here.