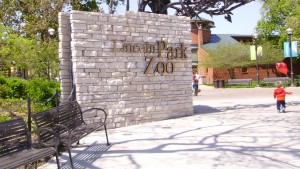 I did something REALLY stupid the other day, and it’s taken me a few days to get up the nerve to admit it.

A good friend of mine works at the Lincoln Park Zoo in Chicago. We decided to have lunch, and he emailed where I should park to meet him. I’ve been to the Zoo many times and know it well. So I drove downtown — all was fine, and I got to Stockton Drive and the Zoo without a problem. My friend indicated the building he worked in was across from the Brauer Cafe (where that little man made lake is) and I should park in the visitor’s parking spot in back. 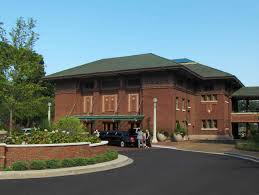 That’s where the trouble began. For some reason I thought he meant in back of the Brauer cafe. So I drove up to the cafe, and saw a road, just wide enough for my Camry, winding off the semi-circular driveway in front of the Cafe. (You can kind of see it on the left). I took it. Then I saw a small arcade that was just wide enough for my car to squeeze through. I turned into it, thinking I’d eventually end up in back of the cafe.

Instead, I ended up in the Zoo proper. On paths where there are never supposed to be any cars. There was no way to get to the back of the cafe, and I quickly realized there was no visitors parking either. 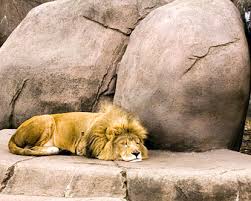 So there I was, driving v-e-r-y slowly past the Lion’s House, the elephants’ domain, and the polar bears’ habitat (they were all inside, of course) wondering how the hell I got there and how I was going to get out.

I must have gone half way around the zoo when a man jogged toward me, hands waving.
I braked and rolled down the window.
He ran up to the car. “What are you doing?” He yelled.
“I’m — I’m lost.”
His expression turned puzzled. “But how did you get in here?”
“I don’t know.” I wailed. At that point I was as upset as he.
“You don’t know how you got here?”
I shook my head. “There was this little arcade near the cafe, and I…” My voice trailed off as I realized how brainless I sounded.
He gazed at me for a while, then shook his head. “I’m the director of operations and I’ve worked here for 30 years. This is the first time I’ve ever seen a car in the Zoo.”
“Can you get me out?” I gulped.
“With pleasure.”
He led me to a gate and then told me to use my ticket to get out.
“What ticket?”
“The ticket you got when you entered the parking lot.”
“I didn’t go through the parking lot.”
“Then how — oh never mind.”
I tried to flash him a reassuring smile.
“Btw,” he asked. “Who are you having lunch with?”
I didn’t want to tell him — I was afraid my friend would get into trouble, but he asked me again, so I did.
“Oh… he reports to me,” the director said.
Terrific. Just terrific.
He stared at me some more, then told me to wait. He came back a few minutes later with a yellow ticket, and told me to use it when I got to the exit barrier. Which I did.It worked. I was sprung. And all the animals–and humans — were safe.

I did have lunch with my friend and told him the story. He reported back later that afternoon that the Director still couldn’t figure out how I got in there. And, btw, he questioned my mental state. I understood. I would have too.

Oh… while he was getting the yellow ticket, I did manage to snap a couple of quick pictures. You can see some of the zoo paths and buildings in the background. 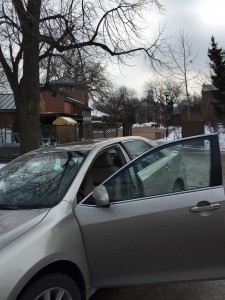 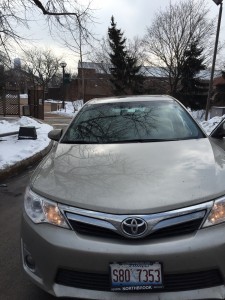 And so it goes on a cold winter day in Chicago.