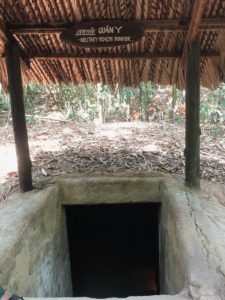 One of the highlights of the trip for me was a visit to the Cu Chi tunnels.  During the Vietnam War, The Viet Cong (VC) dug tens of thousands of miles of tunnels, including an extensive network running underneath the Cu Chi district northwest of Saigon. They connect to the Ho Chi Minh trail, and we visited them. 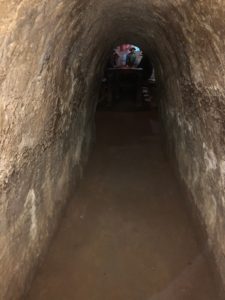 This is what it looks like during the passage through them — it you’re lucky. Some are much smaller and you have to crawl through them. 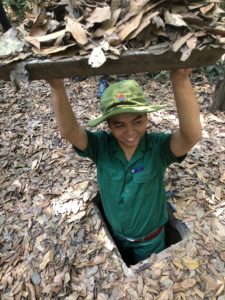 But most of the tunnel entrances and exits are hidden, and you have to know where they are to access them.


The North Vietnamese built the tunnels on three levels so there would be room for a field hospital, a meeting room (where they say the Tet offensive was planned), and more. 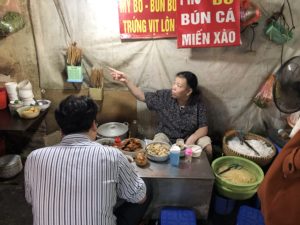 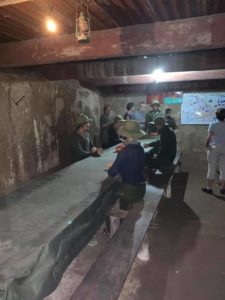 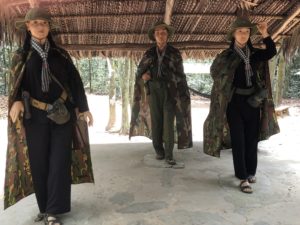 Many VC were women who risked their lives to unify their country. The Black Pajama movement was synonymous with VC, btw. And many of them wore the black and white checked scarf around their necks.

Of course, the tunnels included traps made of all sorts of nasty equipment designed to injure or kill any enemies that happened to find an entrance or exit. One of the more benign traps was the fish hook, but there were others that were lethal, like this one, where the underside includes sharp spikes. 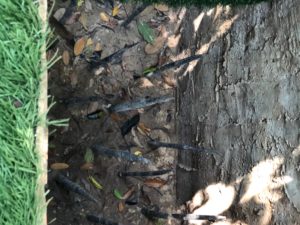 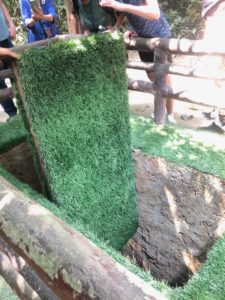