This is a long post, so get cool and comfortable before you start reading.

In the ten years I’ve been published, I’ve probably gone to Book Expo three times, so while I’m not a novice, I’m certainly not a regular. I remember attending workshops at some and was on a panel at another, but I spent most of my time in the exhibit hall. I remember tiptoeing down the thick carpeting of Macmillan, Penguin (my publisher at the time), and the other Big Publishing Companies, wondering who all the people were, watching them talk to each other at little tables, and imagining the deals they were making, even though I knew that most of the big stuff was being negotiated offsite at bars and restaurants. I remember feeling like a tiny ant at a gigantic picnic, grateful to have been allowed in, although no one would have missed me if I hadn’t been there. I remember leaving exhausted, over-stimulated, my bags stuffed with business cards and numbers. 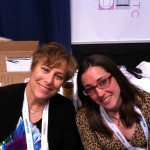 That part didn’t change, but practically everything else did. Book Expo was very different for me this year. Maybe it’s because of the state of the industry and the economy, but the Big Six booths didn’t seem quite so opulent or intimidating. Lots of smaller booths were there, including RTC Publicity (Rebecca, my publicist is on the right), which was why I came to begin with.

But mostly it was different because of the new kids on the block. Amazon took up a lot of real estate and made a huge splash, along with most of their imprints, ACX and Audible, Kindle, and Kindle Select. (More about them later). Kobo was there and announced their new bright and shiny self-publishing program. But most interesting was the presence of new vendors offering a slew of products and services to — guess who– independent authors and publishers!

This was indeed a breath of fresh air. Plus, all the people I interacted with were friendly, warm, and seemed to be interested in what I had to say. For the first time, it felt like my BEA.

Let me start with the people in our booth. Besides Rebecca, there was romance indie author Tina Folsom, who has made quite a name for herself. I don’t know any author who works harder or has more savvy when it comes to marketing. No wonder she’s broken through the one million dollar sales figure with her ebooks. Talking to her alone was worth the price of admission. Romance author Nina Bruhns, historical fiction writer Cynthia Drew, and Lindsey and Micah Gardner of Large Media were also there.

Although small, our booth was strategically located between the rest rooms so we always had good traffic. In fact, so many people came to visit that I wasn’t able to walk the floor or attend any workshops. Well, okay… I did go over to the Overdrive booth but didn’t get answers to my questions, and since I’m doing a lot of work with ACX, I went to hear their presentation too.

Of course, the traditional crowd dropped by: booksellers, librarians, and people who love mystery and thrillers (I gave away over 150 print books and am sending out a bunch of ebooks). I was invited to several events as a result, which is always gratifying.

But most of my business was conducted with entrepreneurs who have come up with some fabulous ideas to support indie authors. For example:

Andrew Rhomberg, who is Austrian but has lived in the States and now in London, has started Jellybooks.com. For authors who want a shot in the arm at promotion, JellyBooks will feature your cover, a sample, and, starting soon, a way for people to “bid” on your book and buy it, if you’re willing to discount it. 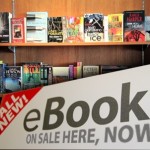 from Canada. Jeff Buick, a thriller writer himself, is working with Kevin Franco, and they’ve come up with a way to actually sell ebooks in retail markets, like grocery stores, and any other bricks and mortar shops! They use self-standing kiosks with a variety of books that can be instantly downloaded onto any e-reader device. They’re only in Canada right now, but they have plans to come into the US soon. What a concept!

There’s also WaveCloud, a site that will connect readers and authors in a more organized way than Goodreads by giving readers the opportunity to create personalized shelves with their recommendations for others to see.

Okay, now for the discussions with Amazon. I met several people from KDP and the VP of Kindle. To each I posed the two questions that everyone seems to be buzzing about now. 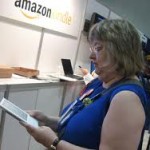 The first was the change in the KDP algorithms. The head of KDP, Nader Kabbani, said unequivocably they have NOT changed the Select algorithms. In fact, he made it a point to check and got back to me the next day, saying the same thing.
“Then why has there been such a slowdown in post-free sales?” I asked.

He did say they’d heard that from a lot of Select authors and that the answer lies in the number of books in the program. There are so many books, he says, that the effect has been noticeable. Six months ago there were barely 100,000 books. Now there are over 160,000. Not all of them can have miraculous sales.

Russ Grandinetti, VP, Kindle, went on to make the analogy that Amazon is made up of many ecosystems. A change in one can affect another… and that a perfect balance between, for example, the sales systems, the ranking systems, and order systems are rare. When they see an element tipping to one side, they’re not always in a rush to correct it. They’d rather watch and see if it naturally rights itself before they tinker with it. He also said that people (ie us) probably give them too much credit (or blame).

Which—indirectly— brings up my second question. Amazon has played a major role in devaluing the price of books by giving us the opportunity to make so many free. What plans do they have, if any, to REvalue books for the long term?

Their reaction was interesting, and not unexpected. Their prime objective, Russ said, is to be customer-centric, so anything that fits that strategy is valued. Their belief is that in many cases, that will also mean it’s good for their suppliers, too (Important: in this scenario, “suppliers” are not limited to authors).

However, they are aware of the situation, and KDP has some plans to do more for authors who meet a certain criteria of performance. They were short on details, but, as an author, the plans really do sound wonderful. They will make our lives much easier. And potentially more profitable. Apparently, we’ll start hearing about them later this year. I can’t wait.

Btw, when I asked how they would define “performance,” ie just sales? Sales plus reviews? I was told that was a good question and that they’re still formulating exactly how to proceed.

So, while they weren’t long on specifics, I felt like I was in the right place. I came away with the feeling that Amazon knows their business, but that they’re interested and curious in knowing more about ours.

It was a good conversation.

It was a great convention.