As some of y 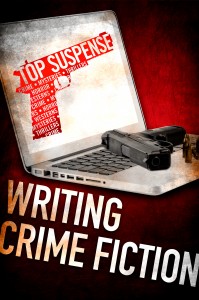 ou know, I am part of a group of twelve excellent crime fiction authors. We call ourselves Top Suspense, and you can find us here, here, and here.) All of us have been published multiple times, have garnered hundreds of award nominations (some of us even won), and have been around the block for a while.

Since we’ve been together, we’ve published several anthologies and a killer round-robin short story called Die Lover Die  (You have to read this). But our most recent publication is the one I love best, and I want to tell you about it. It’s probably a form of BSP… but worthwhile nonetheless.

WRITING CRIME FICTION came out of a group discussion on craft. Yes, authors don’t just talk about Amazon, KDP, rankings, and sock puppets—sometimes we actually talk about our writing and how to make it better. It was an easy transition from chatter to “Hey, Let’s Write A Book.” So we did.

It looked promising when almost everyone chose a different topic to write about. Okay…Lee Goldberg and Paul Levine’s topics were similar, but happily, their articles ended up quite different from each other.

But I knew the book was going to rock (I was privileged to be one of the editors) when the essays started coming in. Whether about going indie, going Hollywood, writing historicals, sex, or defining noir, each article was cogent, offered practical advice, and in many cases, was personally revealing and/or funny as hell.

Here are a few excerpts:

Joel Goldman on Going Indie: “I wanted to “go indie,” but I didn’t know anything about self-publishing except that Joe Konrath was making a crapload of money doing it. To get ready, I spent six months learning as much as I could… Since then, I’ve sold more than one hundred thousand copies of my backlist, recouped all of my start-up costs, and made enough money to fund my ongoing publishing and promoting without investing any additional money. I don’t say this to brag (well, maybe a little).”

Ed Gorman on Writing the First Novel: “Before this, the process of starting at point A and going through to point Z was mysterious, but when I saw it laid out on typing paper, it was no longer such a puzzle. It made practical sense to me now. I also remembered something Al had told me: Look at every chapter like a short story.”

Paul Levine on Hollywood: “I came to Hollywood for the health insurance. That’s right. I lusted after cheap meds, not fame and fortune, when I migrated from Miami to Hollywood thirteen years ago. And why not? A doctor’s visit costs ten bucks at the industry-subsidized Bob Hope Health Center. I quickly learned, however, that writers pay their dues in many other ways.”

Max Allan Collins on the historical PI: “Back in the mid-seventies, I was rereading The Maltese Falcon for the umpteenth time when I noticed the copyright, causing me to muse, “1929 . . .year of the St. Valentine’s Day massacre—Al Capone and Sam Spade were contemporaries.” In the comics business (like Spillane and Hammett, I’m a veteran of that field), a lightbulb would’ve gone on over my head as it occurred to me that the private eye had been around long enough to exist in a historical context.”

Dave Zeltersman on Noir: “In noir, the hero is doomed, but his doom is of his own making. Noir isn’t about tragedy; it’s not the fates conspiring against some poor luckless soul. Instead it’s about our hero sealing his own fate by crossing a line that can’t be uncrossed.”

Vicki Hendricks on Sex: “Writing a sex scene is not as much fun as participating in one—you probably guessed. However, if it is possible for you to enjoy yourself while sitting at the computer hour after hour, tediously moving words around to find some phantom best arrangement, when you could be baking bread or painting the bathroom—or drinking beer—then writing a sex scene is your best bet.”

And that’s only six of the excerpts. I am very proud of our work in this collection. I hope you’ll give it — and our other work–  a look.