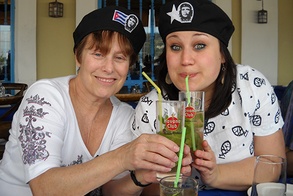 Today, more than three million tourists visit Cuba every year –except for Americans, of course, although that’s bound to change. And soon. In fact, tourism is the country’s #1 source of revenue. People are drawn by Cuba’s climate, beaches, attractive prices, and remarkable history.

It wasn’t always this way.

After the revolution, relations between the US and Cuba deteriorated. By September, 1961, all the casinos were shuttered, and Cuba was formally a Marxist state. The island was cut off from the rest of the non-communist world, and President Kennedy imposed a trade embargo that included a travel ban by US citizens. By the mid-1960s Cuba’s government had banned all private property on the island and outlawed foreign currency. The country’s tourist industry died. The only non-Cubans to visit (and stay) were Russians.

The Special Period (See The Cuba Files #2) changed all that. The island sank into a severe depression in the early ‘90s when the USSR collapsed. After several years of disastrous food shortages, a failing agriculture system, the absence of almost all petroleum products, and industry stagnation, the government decided it needed to boost tourism. Select European developers were allowed to join Castro and build sumptuous resorts (but no casinos), and the province of Matanzas, about an hour from Havana, became a vacation mecca.

Now travelers from across the globe visit Cuba, arriving at the country’s seven major airports by the tens of thousands. The majority come from Canada, where visitors have increased by 10% a year since 2007. Europeans love Cuba too, with large numbers of people visiting the island from Britain, Spain, Italy, Sweden, France and Germany.

The number of American tourists isn’t known, because, despite a small number of legal “People-to-People” tours, sanctioned by the State Department, most Americans visit the country illegally. There are hints that as many as twenty to thirty thousand Americans visit Cuba every year, but the Cuban government claims more than 60,000 US visit annually.

However, in the process of building tourism, it became apparent that the Cuban experience is very different for tourists than its natives. In effect there were and continue to be two separate societies.

Until recently European beach resorts were off-limits to Cubans. They were only allowed to work in them, and employees were carefully screened by the government before being hired.

In addition, two currencies developed. Cuban Convertible pesos, aka CUCs. (kooks) were created. One CUC roughly equals a dollar, and that’s what tourists use when they travel within Cuba. But Cuban citizens still use the Cuban peso, which is roughly 25 to the dollar, and therefore much less valuable. Which drives the average Cuban deeper into poverty. At the same time, dollars are not legal in Cuba. (Except in the black market). It was thought these restrictions would help Cuba bring in hard currency, which it desperately needs.

Another disturbing contrast is the food. At tourist hotels, including the famous Nacionale, you see lavish spreads for every meal, of which many are served buffet style. There are meats, cheeses, fruits, breads, pastries, salads, and more. And yet at a Cuban restaurant, you’re lucky to see more than a couple of menu items. And hardly any beef.

Btw, the cost of internet connections are still outrageous, partly because it’s an island and needs complex infrastructure, but partly because only 118 internet cafes exist across Cuba, and they’re all run by the government. The cost, for Cubans, is about $4.50 an hour. Bear in mind the average monthly salary for Cubans is just $20. I’m told the costs are coming down. I hope so.

The policy of restricting hotels and services to tourists came to an end, courtesy of Raoul Castro in spring 2008. Now Cubans are theoretically allowed to stay in their own country’s resorts, but nobody knows exactly how many have done so. Access is said to be very limited, simply because most Cubans are so cash-poor.

Looser restrictions have also created a new “privileged” class of Cuban. Tour guides, taxi drivers, and restaurateurs accept tips which help compensate for meager salaries. Plus, unlike the general populace, they carry cell phones, and get first dibs on the supplies that many visitors bring into the country, including medicines, clothing, baby equipment, toys, and books. Those who aren’t fortunate enough to be part of this group still eke out a living, and there is a thriving prostitution market for both genders, as well as beggars and street people who charge tourists to take a photo with them.

For me, though, the most important issue for Cuba’s future are the Cuban people themselves. Yes, Raoul Castro loosened restrictions on owning restaurants (paladars), small hotels (called casa particulars), buying and selling property, and small entrepreneurial businesses. But two generations of Cubans have grown up working for the State, where one does only the minimum amount of work and makes sure one’s palm is open to small bribes and perks. The Horatio Alger ethic has all but disappeared, and many Cubans expect the state to take care of them. How are these people going to make it? Already there are reports about how tough it is to turn a communist society back into a capitalist one.

Ironically, the saving grace for Cuba may well come from the decades of deprivation suffered under Fidel. There is an expression in Cuba— to “resolver”— to make do, to invent ingenuous solutions to problems. They say it’s how Cubans keep all the American cars from the Fifties running. And how they have survived the absence of basic services over the years. Wouldn’t it be wonderful if Cuba “resolver-ed” its way back to prosperity?