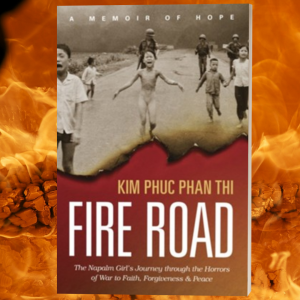 You can’t be an American without having strong feelings about the Vietnam War. One of the most extraordinary images from it, and one of the world’s most shocking depictions of the impact of violent conflict, is an image that, once seen, is never forgotten. It’s the famous heart-breaking photo of the eight year old “Napalm girl” running down the fiery road crying,

The little girl, Kim Phuc Thi, wasn’t expected to survive. She did. And the next 20 years were horrifying for her. She suffered through 17 surgeries, excruciating pain, skin that was grafted many times, and thick scars that, to this day, still cause her pain. Medics told her she couldn’t get married or have children, and then after the war, the Communists used her for propaganda purposes, with interpreters changing what she said to match Communist talking points. Kim felt alone, isolated, hopeless, and ultimately suicidal.

Kim and her family lived in the village of Trảng Bàng in South Vietnam. On June 8, 1972, South Vietnamese war planes dropped a napalm bomb on the village, which had been infiltrated by the Viet Cong. When a Republic of Vietnam Air Force pilot mistook the group of fleeing people Kim was with for enemy soldiers and diverted to attack, their bombs killed two of Kim Phúc’s cousins and two other villagers. Kim suffered third degree burns from the napalm.

Kim eventually wrote a book of her own about her experiences called Fire Road, telling the true story of how she found Jesus Christ, whom she sees as the Savior who personally understands and cares about her pain. She reveals the details of a life changed in an instant.

I’m Jewish, of course, but I couldn’t be cynical about her transformation. The trajectory of her life dramatically changed. She became forgiving, she found acceptance, and she turned her wounds into something positive. These days Kim is a UNESCO Ambassador of Peace and an evangelical missionary of sorts, and she speaks to audiences around the world. Despite what the doctors said, she did get married, and has two sons. In addition, over the years, Kim converted her entire family to Christianity.

She’s begun a new treatment from a doctor she met who’s has been able to open up her skin follicles to relieve the pain – terrible pain being what happens when your hair follicles are burned and your body can’t sweat. In fact, Kim, a Canadian citizen, is wearing short sleeves for the first time in her life.

I highly recommend this memoir. It’s beautifully written and a fast read. My only quibble is a familiar and age-old spiritual, perhaps, philosophical one. In an era such as the one we find ourselves in, where our leaders are doing their best to destroy democracy, corrupt the system, and break the law, how long can we hang onto the idea that the human race is naturally good, led by a virtuous god? Kim survived a war and spent most of her her life paying for that survival with constant pain and suffering. And yet wars keep happening and evil persists.