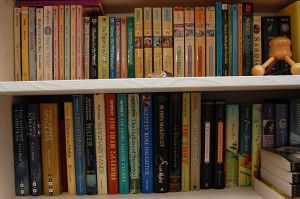 I never thought I’d have to write this post. I figured it was a no-brainer. A non-issue. But then, a friend of mine told me about several traditionally published authors who fought and argued and struggled and finally got their out-of-print backlist titles from their publishers.

“Because they turned around and farmed out their titles to an ‘ebook pubisher.’”

Authors, why are you squandering money coming in through the front door by throwing it out the back? Why are you giving another entity control over your intellectual property? And a cut of your proceeds? In today’s book industry it makes no sense.

Don’t say it’s because you don’t know what to do or how to do it. I will teach you in about five minutes by giving you the emails of people who will do what you need to have done. Including converting the book.

Don’t say it’s because you don’t have the money. It isn’t that expensive.

Don’t say that you’re a writer, not a businessperson. You are business-oriented or you wouldn’t have fought to get your rights back. You knew you could make money from them. Good money, too (Btw, to that end you really need to read Kris Rusch’s latest blog post).

And don’t say you just don’t have time to do the marketing and promotion and would rather have someone else do it. Do you really think, in today’s social media environment, any publisher is going to promote you as well or as thoroughly as you can? Especially after being published by a traditional publisher and seeing how much marketing and promotion they did for you? In fact, if you believe someone else can do it for you, I’d like to tell you about this bridge…

It really isn’t hard to put your books up yourself. Here’s a rough idea of what you’ll need:

— A clean word document (Don’t worry. If you only have a PDF of the final version, there are websites that will convert it back to word for you. Free.)

— A new cover. This is the most important step and the place where you SHOULD spend whatever funds you have. A cover is your calling card. It will be there forever. Still, it shouldn’t cost too much more than $250. You’ll find a terrific graphic artist here.

— Conversion. And no. You don’t have to do it yourself. I don’t. Plus, costs have come WAY down now that there are more converters out there. I rarely pay more than $50 per book.

—  Upload your book(s) for free to Amazon, Smashwords, the iBookstore, and Kobo. I am not a tech guru by any means… but even I can do that.

Except for marketing, which is another kettle of fish (and one that I might dive into in a later post). You will need some money for advertising, but how much is up to you. And you won’t need it immediately. To start the ball rolling, I still think it’s a good idea to go into Amazon Select. Even though the results are not as robust as they once were, it’s a good way to jump-start exposure and sales. And it’s free. Once you get some revenue, you can put the proceeds into more promotion, if you want.

If  an E-book publisher says they can do more for you, I’d really like to know what they’re promising. I probably won’t believe it. Remember, when you give your rights away, you’re giving them away long-term—just like you did with a traditional publisher. Why would you want to put yourself in the same position all over again?

You can do this. Really.