I’ve been trying to figure out what it is about HOMELAND that has turned me into a junkie. I had to sign up for Showtime because I couldn’t wait a day or two until it came online. I am turning down dates and engagements on Sunday nights, even if I think I’ll be home in time. Just in case. And I always read the recaps Monday morning before I start writing.

So why has this show totally subverted me?

Is it the theme of good vs bad in the age of terror? I don’t think so. 24 and MI-5 did that pretty well, and I imagine there will be a slew of copycat series in the next few months. The premise is not unique.

Is it the setting of Washington, DC? No. I used to live there and couldn’t wait to leave. And yes, I know the series is filmed in Charlotte, NC, not DC.

Is it the special effects, the threat of violence, the possibility of danger? No. All that’s been done before.

So what is it that’s turned me into a junkie? Here’s what I think.

HOMELAND is the first time we’ve seen a woman, and a flawed woman at that, as the protagonist of a series. Sure, we’ve seen Kyra Sedgwick, Calinda’s Archie Panjabi from the Good Wife, whom I adore, and even 24’s Aspi-geek Mary Lynn Rajskub, but they’re  pretty much tough as nails women. Carrie is too, but she’s also bi-polar, she cries regularly (Btw, Claire, enough of the waterworks—they’re getting old), and she makes mistakes. For which she’s not ashamed. I really like that kind of vulnerability. I need to watch her. She makes me feel well-adjusted.

In the same way, the chief antagonist, Brody is a heralded Marine, former POW, and, now a Congressman. That he’s also a pathological liar, weak-willed, and probably a narcissist, makes him—and their relationship— fascinating. We know he’s going to self-destruct at some point and probably bring Carrie down with him. She knows it too, and maybe he does in some subconscious way, as well. Still, we can’t turn away. We want to witness every inch of the train wreck we know will eventually come.

One of the clever decisions made by the show creators is NOT having a different crisis every week. The show unspools from week to week with one overarching story line, not a collection of mini-stories. We become invested in the characters and their development, their behaviors. And yes – it is close to soap opera. Works every time.

Which brings me to the acting itself. It really is superb. And subtle. Carrie Mathison is the role Claire Danes was made for. 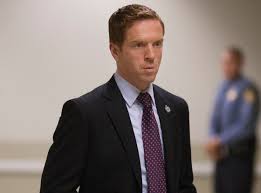 Brody is Damian Lewis’s best role, too. Both actors can say more with a twitch of their eyebrow than most actors do in a entire scene. And in an espionage story, where subtle behavior can mean the difference between truth and lies, life and death, we watch their eyebrows twitch with awe. What does it mean? Who can she trust? What will happen next?

And please, let’s not forget Mandy Patinkin (who is now my Facebook friend..:).

Who would ever have thought he would make a fabulous father figure? Really, all the actors, from Brody’s wife, to Estes, even Virgil, to Dana inhabit their personas without a caricature or stereotype in the bunch.

But what’s made me a true Homeland junkie is the show’s intensity. It never lets up. I have to gird myself before each episode because I know it’s going to put me through the wringer emotionally. Each episode raises the stakes, increases the complications and obstacles, heightens the consequences, and refuses to give us answers… and there’s NO relief… for 44 minutes.

That , btw, is what defines suspense. Suspense should escalate the stakes, the questions, the uncertainty. Suspense should make it impossible for us to turn away from the screen (or put down a book, for that matter). And HOMELAND is suspense at its best.

So far HOMELAND has been able to transfer that intensity to the screen without resorting to wooden dialogue (remember how lame 24’s dialogue could be?) or killing off the character you care most about (MI 5). The show is like a juggler with seven plates spinning in the air at the same time. I wonder how long it can last.

Although, for now, I don’t really care. Just keep those plates spinning.

PS I love karma, don’t you? This afternoon Salon just posted this article about female espionage agents and how they probably surpass male agents in perception, multi-tasking, and endurance. Go Carrie!