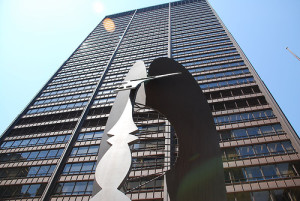 Two days ago I was called for Jury Duty down at the Daley Center, which for those of you not from Chicago, is both the city and Cook County courthouse in the heart of the Loop. It mostly tries civil cases, ie lawsuits. As it happens, I don’t mind being called for jury duty. It is my responsibility, and I take it seriously. In fact, I’ve wanted to be put on a murder case, and I was questioned for one a few years ago. Unfortunately, they rejected me, and I haven’t yet had the privilege of serving on a jury. Maybe Wednesday would be different, I thought.

I arrived at 8:30 am as instructed. I went to the jury room where after about 45 minutes we were shown a video about the rights and responsibilities of being a juror. I didn’t realize that America is the only country in the world that allows a litigant a jury trial if they wish. Yay USA.

Btw, Timothy Evans, who used to be a firebrand alderman, is now the Chief Judge of Cook County. Boy, has he changed! I sense he likes the life. And a younger, mustachioed Lester Holt was the on-camera narrator.

It may be time to update the video, guys.

Anyway, I was assigned to Jury pool #1, and I promptly thought, “Wow! This could be a short day.” I waited (that’s mostly what you do when you’re called for jury duty) for them to start calling the pools. Imagine my disappointment when the first up was Pool #11. I sagged. The second was #12. More sagging. But the 3rd call was my resurrection: it was Pool #1!

Off I went, with about 35 of my newest best buddies to the 24th floor, where, of course, we waited  for about half an hour.

At about 10 AM, we were led into the courtroom. Both the Plaintiff and Defendant were there, each flanked by two lawyers. The judge welcomed us, talked a little about what we should expect. He said it would be a one day trial and that it involved a traffic accident in a parking garage.

The judge gave a few more details, then asked if any of us wanted to make a comment after voir dire. I raised my hand.

The lawyers asked questions… including the fact that if one of the principals in the case wanted to become a pastor, would that be a problem for us? Nope. If another did a stint in rehab, was that a problem? Nope. Had any of us been the victims of a crime? If so, what type of crime? (I was mugged at Maggianos 8 years ago. I wasn’t harmed but two goons trapped me in the revolving door while they lifted my wallet.)

Then the defense lawyer asked the most convoluted question I’ve ever heard. For a writer, that’s a CODE BLUE… if you can’t understand the question, how can you answer it? Apparently everyone agreed, because the lawyer tried to rephrase it. Then he asked, “Does that make any sense?”

I piped up with a loud  “No.”  For some reason, everyone in the courtroom laughed. Including the judge, who said to the attorney, “Well, I guess you have your answer.”

Twenty minutes later, they called the people who’d wanted to make a comment into the judge’s chambers. I was the last. I went in. The lawyers were there, and the judge sat behind his desk.

“Well, hello author,” he said cheerfully. “Are you any relation to Lillian?”

I took a breath. “I’m sorry, your honor. I know I’m being unfair. But I’m already prejudiced about this case.”

“I realize I don’t know the facts, but it sounds to me that this is a frivolous lawsuit that should have been settled a long time ago. There are so many more important issues that the Cook County ought to be considering.  I’m irritated that we’re all dealing with might turn out to be a fender bender. It’s a waste of the court’s resources.”

The judge stared at me. The lawyers’ faces turned crimson. There was silence in the room.

Then the judge laced his hands behind his head. I was beginning to get the feeling that maybe I shouldn’t have opened my mouth. I was right, because the judge said, “Well now, Ms. Hellmann. Based on your comments, I think you would be a PERFECT juror down at 26th and Cal. And I’m going to see that you get assigned there.”

Again, for those of you who don’t know, 26th and Cal is the criminal courthouse for Cook County. That’s where they adjudicate murders, drug dealers, armed robberies, etc.

Now as far as I know, the judge didn’t know I write crime fiction, although I suspect the lawyers, all of whom had laptops, probably Googled me before I came in. And it’s not that I don’t want to go down to Criminal Courts. It’s just that I need to plan for it. It takes 90 minutes to drive from where I live, and I have to do something about the dog if I’m going to be gone all day. But that’s not what you say to a judge.

“Whatever you think, Judge,” I said meekly. I knew what he was saying. He knew what I was saying. And we both knew I wasn’t going to be on this jury.

That might have been the end of the story. But hey, this is Chicago.

The judge and lawyers came back into the courtroom and announced who was on the jury. I wasn’t, of course. Then the judge said, “The rest of you can go back to the jury pool room, collect your checks, and go home.”

“Except for Ms. Hellmann.”

Everyone looked at me. I swallowed. The sheriff’s deputy proceeded to escort me back down to the jury pool room where she told the clerk behind the counter that I was NOT excused and that the judge wanted me re-assigned to 26th and Cal.

The clerk frowned. I knew he was thinking “WTF?” He asked me to step aside while he handed over checks to the other excused jurors.

Eventually he motioned me over. “I think I know what’s going on,” he said. “You’re the type that marches to a different drummer, aren’t you?”

“Not really ,”I said. “All I did was tell the judge I thought it was a frivolous lawsuit.”

“Ahh…” The clerk said. His eyes narrowed. Then he cocked his head. I could tell he was trying to figure out what to do. It was clear I wasn’t happy, and neither was the judge. I held my breath while the clerk pondered the situation. I didn’t want to go to Criminal Court, at least not for a while.

Finally the clerk looked up at me and shook his head. “You know what? I’m not gettin’ involved in this. Here’s your check. Take it and get out of here.”

Saved! I couldn’t believe it. I mouthed the words “Thank you,” grabbed the check, and hurried to the elevator before he changed his mind. Or the judge called to make sure I’d been reassigned.