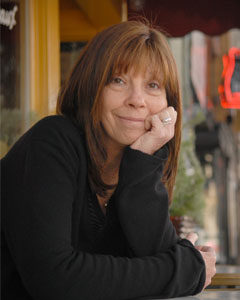 Aimée Leduc is a chic, no-nonsense Paris-based PI and heroine of 15 mysteries, by Cara Black, a New York Times bestselling author. In June Cara released Murder on the Quai, a prequel revealing how Aimée first became a detective. Cara has won multiple nominations for the Anthony and Macavity Awards, a Washington Post Book World Book of the Year citation, the Médaille de la Ville de Paris and more, and has more than 400,000 books in print. Earlier this year I talked to Cara on my Second Sunday Crime show.

Murder on the Quai – The Backstory

The book is set in 1989, the year of the big San Francisco earthquake (that’s where Cara lives) and the year the Berlin Wall finally came down. Aimee is a young student struggling with her PreMed college program, a tough landscape where just 25% of pupils make it through to the second year… and someone is trying to sabotage her in class.

Russia is falling apart, it’s the last gasp of the Cold War, and Aimee’s father is on his way from Paris to Berlin to get vital files about Aimee’s mother out of the Eastern Bloc before the East German police, the Stasi, can sell them to the highest bidder in an effort to save their own necks.

We (finally) get more  backstory on Aimee’s parents. Her dad was a police officer, a beat cop who met Aimee’s mother when policing a demonstration. They fell in love. He was accused of corruption, and she left to become an Eastern European radical. Her parents were only together for 8 years before the shit hit the fan – a bad boy and an equally bad boy brought together by a magnetic attraction.

The attention to detail given to history in Cara’s novels makes them particularly true to the times, and Cara has always wanted to write about the chaotic days after the Berlin Wall fell. She was in Berlin at the time, and saw the drama in real life. She was even hauled in by the Stasi in East Berlin, before the wall fell,  for photographing the scenery with a Brownie camera and was questioned for several hours. Three years ago she returned to the city and stayed in the former East Berlin, an emotional experience, especially when walking through the Brandenburg Gate, which for years sat in no-man’s land, trapped between East and West. It was an incredible and moving experience, something she never thought she’d see in her lifetime.

Back to Aimee. When her dad died she gave up on medicine and took over his detective agency, training as a PI. The book explains how it happened. We meet Aimee’s granddad Claude, who played a part in raising her after her mom left, and Cara fell in love with the character. Claude is a fine cook and bon vivant who adores his granddaughter. The character is made up from all sorts of people who were influential in the author’s life, including her own grandfather. He believed we should always do what we love, and he inspired her to write. She just wishes he had lived long enough to see her books in print.

There’s a mystery within the new book, and a strange World War Two story inspired it. Cara went to visit a neighbor from San Francisco, who was living in France, whose parents were Parisian. During a visit to the countryside, to the village where her friend’s dad had grown up, the old man revealed a grisly secret, something he hadn’t told the family. Apparently when he was small, during the war, he could hear the German soldiers talking just over the river that marked the line between Vichy and occupied France in 1939 to ’42. And that’s where it happened. He found a man shot to death on the riverbank, a man from the village. Did the Germans or the French Resistance kill him? He didn’t know. But he knew one thing… the killer was still alive, living in a château, having done very well for himself, and there were rumors about his wealth coming from a stolen haul of purloined Nazi gold.

Cara never forgot the story, and she wanted to write it into one of her Aimee books, to play with the idea of the secrets kept by an entire village for more than fifty years. So she manufactured a story based on the shocking things she’d heard, changed the name of the village, did lots of fact-checking, researched the old WW2 demarcation lines and checkpoints, and found photos of the time.

Now… how did Aimee get involved in detective work? A distant family member came to her dad’s office, who had met Aimee as a child. Aimee has always longed for information about her mother. When Aimee called the woman, it led to the discovery of a pile of lost Nazi gold stolen from the French. The Germans needed titanium, which was mined in Portugal, to armor-plate their tanks and take on the might of Russia. So they made a deal with the Portugese dictator to swap titanium for gold.

Where there’s gold, everybody wants a piece of the pie.  As Balzac said, behind every fortune is a giant crime. The resulting book combines real life events with fiction, taking a true story and reworking it to see how things might happen a different way.

Cara loves the research process, which included talks to a French policeman working in Vice, a visit to the Champs Elysee nightclubs where the 1980s Jet Set went, places that are still run by the mob. The Golden Triangle is the wealthiest part of Paris, the perfect place for newly-wealthy people whose riches are highly suspect. While there, Cara was stumbling around one day and found a bookshop full of hunting books. The shop was established in 1946, and it struck her as the perfect way to launder dodgy money. The rest is history – it’s  fiction, but at the same time it’s “plausible.”

Of course, I personally am entranced, since WW2 resonates so strongly with me. If you haven’t already read it, put Murder on the Quai on the top of your list! To listen to the actual show, just click here.