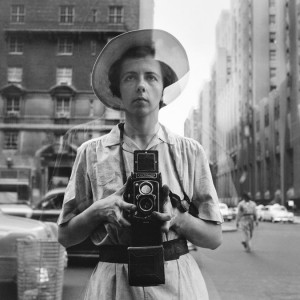 In the mood for a mystery? Well, this is a different type of mystery, especially if you love photography and the visual arts. As you undoubtedly know by now, I’m from Chicago, and one of the most fascinating stories I’ve come across recently  is about photographer Vivian Maier.

This quiet woman was born in New York in 1926, but she spent most of her childhood in France.

Returning to the States as a young woman, she worked for almost forty years as a nanny on the North Shore. In between her nanny duties, she took over 150,000 photographs, most of them on the streets of Chicago, New York, and Los Angeles.

But here’s the thing—during her lifetime she was completely unknown. In fact, many of her rolls of film were never even developed. Vivian Maier was a loner.

She never married, she never had her own home, and she was always taking care of other peoples’ children (when she wasn’t snapping photos). She never tried to display, sell, or otherwise profit from her photography while she was alive.

After her death in 2009, however, Chicago collector and historian John Maloof bid on her possessions during an auction. When he sorted through the boxes, he came across some of her photos, scanned them, and started posting them on the Internet.

The results went viral. It turns out that Vivian Maier is one of the most talented American photographers ever.

She shot most of her photos in a thirty-year span from the 1940s through the 1970s, roughly the same time that Henri Cartier-Bresson was working. Those of you who are into photography know he’s considered the “father” of the Decisive Moment, the technique of waiting for the precise moment to take a photograph so that it evolves into art, not simply a photo. My impression is Vivian Maier’s photos are definitely art.

BTW, you’ve probably guessed by now I love photography, probably more than paintings. Photos are a reflection of reality, and yet that reality can yield such artistry.

Indeed, Maier’s photographs are so crisp, so beautiful, and in some cases so haunting, that it makes me wonder who Vivian Maier really was. When she looked through the viewfinder of her camera, what did she see?

Did she see the joy, the hustle and bustle of the city, the victorious end to a war that brought the world to its knees? Or, did she see the down-trodden, the melancholy, and the mean-spirited events life can bring?

I wonder, too, why she stayed in the shadows. Clearly, she didn’t want to make her photography public. Perhaps her photos were her version of a diary: a highly personal set of documents that tracked her moods and whimsies.

Since her work was discovered, her photographs and story have been talked about and exhibited worldwide. Critical acclaim and interest has proliferated. Prints of her work now sell for over $2000 each. A documentary film, “Finding Vivian Maier,” was made, and you can find it on both Netflix and Amazon.

In addition, there’s a shorter film called “The Vivian Maier Mystery,” available on Amazon, and there are at least four books of her work, including Out of the Shadows, by Richard Cahan, himself a Chicago writer.

And, of course, what would art be without a controversy over the spoils? Especially in Chicago.

Maloof, the collector who bought tens of thousands of her negatives for less than $400 in that auction, has promoted her work through commercial galleries, museum exhibitions, books, and the film.

He also contacted genealogists to find heirs to Maier in France and eventually paid an undisclosed amount for the rights to her work to a man named Sylvain Jaussaud, whom experts identified as her closest relative, a first cousin once removed.

However, last June, David Deal, a commercial photographer himself, filed a lawsuit claiming he’d found another French cousin once removed, who is the true heir to what is now considered Maier’s fortune. The result? A messy legal battle that could keep Vivian’s work from being exhibited for years.

This would be a real shame.

So, in the end, Vivian Maier remains a mystery. What drove her to visually record her life and that of American society? Why did she choose to keep it private? And, perhaps most important, what does her art teach us about our world and ourselves?

I hope you take the time to explore the world of Vivian Maier. If you live in Chicago, there’s a fabulous exhibit of her photos right now at the Chicago History Museum. When you see it, I have a feeling she’ll remain with you, as she has with me, forever.