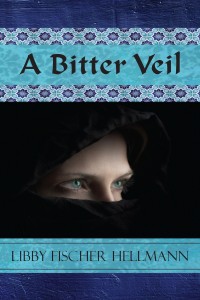 l, A BITTER VEIL, will be out April 15, and PW has just weighed in. Here’s what they said:

“The Iranian revolution provides the backdrop for this meticulously researched, fast-paced stand-alone… Anna Schroder, an English major at the University of Chicago, meets Nouri Samedi, an engineering student at the University of Illinois’s Chicago campus. After Anna and Nouri fall in love and decide to marry, they travel to Iran just as the shah’s regime is falling apart. By the the time the shah flees the country, Anna is teaching English through an American advocacy group. Within months, as the political upheaval continues and America is vilified as the Great Satan, tragedy strikes and Anna becomes a pariah to Nouri’s family and friends. Worse yet, she becomes ensnared in a murder investigation and finds she has no one to trust and nowhere to hide. A significant departure from the author’s Chicago-based Ellie Foreman and Georgia Davis mystery series, this political thriller will please established fans and newcomers alike.”