I first came to Chicago in the fall of 1977. At the time I was looking for a job in broadcast news (Which turned out not to be, but that’s another story). I’m still not sure who told me about it, but I stayed at the Belden Stratford, an apartment-hotel in the middle of Lincoln Park, which at the time, housed one of the best Mandarin restaurants in Chicago, the Dragon Inn. (I still go to the Dragon Inn North – same owners). 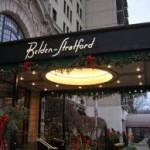 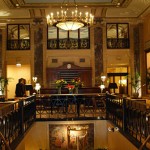 In 1977 the Belden-Stratford wasn’t an assisted living facility, but you might have mistaken it for one. Formerly an elegant hotel, the lobby still had a patina of style, but most of it had faded into a dusty, dingy, place with frayed carpets, and cracked leather furniture. (It appears to have been remodeled since). I booked it for a month, spending my time going on interviews, working freelance, and seeing the sights of Chicago.

I would get back to the hotel around four, and would be greeted by a phalanx of senior citizens lounging on chairs and sofas in the lobby. They would stare at me as I swung through the door. Most of them looked vacant, some sad, and no one smiled. I didn’t stop but made a beeline for the elevator.

One day, though, one of the women did smile at me, and I decided to sit next to her. She must have been well into her eighties, she looked frumpy, and she walked with a cane. We started to chat about this and that… nothing important, just passing the time of day. She asked me why I was staying there, and I told her. I asked her how long she’d lived there, and she told me. I was about to say goodbye and go up to my room when she said. “You’re probably too young, but do you happen to know who Benny Goodman was?”

Now, you have to know that my late father was a party animal. He was the guy everyone wanted to be around when the music started playing and the drinks were flying. And along with Frank Sinatra and Ella Fitzgerald, he had all of Benny Goodman albums. In fact, at least once a week, usually on Saturday nights, the strains of Benny’s clarinet or Ella’s perfect soprano or some other Swing and/or Big Band tune would float upstairs as I was trying to fall asleep. I told the woman that.

Once I put my jaw back in alignment, she said, “Come with me, sweetie.”

We went up to her small, cramped apartment. Every available inch of wall space was covered with framed photos and newspaper clippings. Other mementos spilled onto end tables next to china figurine miniatures, lace doilies, and other tchotchkes. Most of them were a memorial to her brother.

There were photos of him playing with Gene Krupa and Harry James at the Blackhawk restaurant, album covers (some the same as my father’s), family photos taken in the Maxwell Street area where they grew up – there were twelve siblings – and one photo of their father, who died before his time in a traffic accident.

I was fascinated and looked through everything. Then I asked if I could bring my camera down so I could take pictures of the pictures for my father.

“I have a better idea,” she said (To this day I can’t remember her first name… my bad). “How would you like a photo?”

I nodded, and she gave me a picture of Benny, Gene Krupa, and Harry James. It was a candid, and they were rehearsing. She didn’t know where. I do remember two of them (don’t recall which ones) had cigarettes burning.

I sent my father the photo the next day.

That was my first “Chicago” moment, not particularly exciting or memorable except to me. A piece of Chicago’s past had been shared with me, and I felt a bond with the city, its history, and the talent nurtured on the shores of Lake Michigan.

That was over 30 years ago. Benny Goodman is gone, his sister is too, and so is my father. But during the few moments I spent in her apartment, something registered. A sister who was inordinately proud of her brother and was able to tell the tale to a younger person who appreciated it.

It was a special moment, and I knew from that day forward that I belonged in Chicago. Come hell or high water. Maybe even so I could tell this story one day.

Stick around to hear SIng, Sing, Sing, by the Benny Goodman Orchestra (with Sid Caesar too)!