I’m both embarrassed and proud.

Embarrassed because I’ve lived in Chicago almost 35 years but never really knew much about Jane Addams and Hull House until yesterday.

Proud because such an amazing woman and the institutions she created are part of my “home town” history.

I had the opportunity to tour Hull House Museum yesterday and was overwhelmed by what one person can accomplish in a lifetime. First, the woman. Jane Addams, born in 1860, was the daughter of a well-off father. She grew up in Cedarville, a small Illinois town where her father was a mover and shaker. He also instilled in her a love of reading. She subsequently developed a social conscience, reading lots of Dickens (who says literature can’t affect a person’s life?) and decided she wanted to help the less fortunate. As a young woman, she thought becoming a doctor would accomplish her goal, but that didn’t work out. Eventually, after visiting London’s Toynbee House, she decided to join the early settlement pioneers who were committed to improving the life of others within the framework of a democratic society. She moved to Chicago with her college friend Ellen Gates Starr and in 1889 eventually started Hull House.

What was Hull House?

Think community center on steroids. Jane was apparently a very persuasive person. When she saw a need for something, she either motivated herself or others to provide a solution. Over a thirty year period spanning the turn of the century, Hull House expanded to a campus of 13 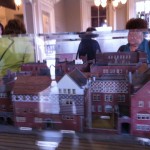 buildings, all dedicated to improving life for the residents of the 19th Ward of Chicago. Whether it was lobbying for garbage collectors to clean up the streets, establishing a day care center for children of immigrants, creating a theater program, a crafts school, or what we now know of as adult education, it happened at Hull House.

She started a “half-way” house of sorts where working women could live, at least temporarily; developed a bathhouse for children who had never had one; even started a coffeehouse and gym.

On a broader scale, whether it was voting rights for women, stricter child labor laws, advocating for better housing, or developing statistical methods of studying a neighborhood that are still used today, there weren’t a lot of issues Addams did not get involved in. Along the way she cultivated a coterie of men and women who were equally devoted to those causes. Some not only contributed money but became residents at Hull House while they worked on turning their dreams into a reality.

Speaking of broader scales, she was very well traveled. I think she might have had a crush on Trotsky, and there’s a letter from Gandhi in her bedroom. Oh, and did I mention she was the first American woman to win a Nobel Prize in 1931?

It’s too bad the words “Socialist” and “Community Organizer” have been used to criticize  those who care about improving the lot of others, because that’s what Jane Addams did. And believed in. Even so, she fiercely refused to let people define her as a Socialist or a Progressive or a Pacifist. She didn’t believe in labels. She just thought that those who were more fortunate had a responsibility to help those who weren’t.

Simple stuff. But she made it happen. And didn’t give up until it did

As you might imagine, her opinions and writings did not sit well with some. Here is a photo of her FBI file. It’s quite thick, maybe 3-4 inches. 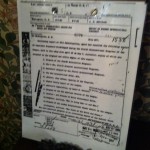 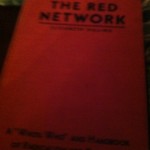 She also merited a several page spread in this book.

If you live near Chicago, it is worth the hour to tour the Museum, especially on a winter day when there’s not much else to do. If you’re not from Chicago, put it on your list of sites to see next time you come to town.