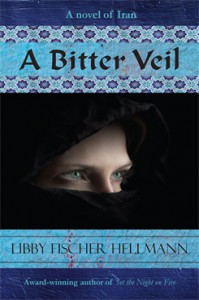 Although A Bitter Veil has been out for several months, I realized I’ve never discussed it here. Especially in terms of how it meshes with what I think are important elements of the craft of writing. So if you’re interested, read on.

As crime writers we learn early that “conflict” is the most essential ingredient of fiction. We learn that there must be conflict on every page, even if a character just wants a glass of water but can’t get it. Over the years, I’ve taken that lesson to heart. I’m always looking for conflict, large or small. Recently I may have taken it to the extreme by writing about revolutions. In fact, my publisher says I’m in the midst of my “revolution trilogy.” (She’s not far off—my next book will be set largely in Cuba.)

But I come by it more or less honestly—I was a history major in college, and I still love to examine the past and how it affects the present. And what triggers more conflict than a revolution? Whether it’s the French, Russian, Cuban, Chinese, American—well that one was a little different—or what we’re now calling the Arab Spring, nothing shakes the foundation of a society more than internal strife.

A revolution provides conflict that can affect an individual, a family, a village, a government, and its relation to the rest of the world…in a word, everything. It is a time where people can prove to be cowards or heroes, informants or patriots. People form unusual relationships, while others are torn apart. Love can flourish, but so can hate. A member of one family can be an enemy to the others—to the point of violence or death.

The rumbling of discontent always precedes the revolution, and there’s usually an overreaction afterwards. In the French, Russian, Cuban, and Chinese revolutions, a period of extremism followed the overthrow of the king, czar, or government. And those periods can prompt even more conflict and chaos. Even a revolution that didn’t quite make it—for example, the period of the late Sixties in the US, which was the setting for my previous thriller, SET THE NIGHT ON FIRE—can be a powerful source of turmoil.

That was one of the reasons I chose to write about Iran. The Islamic Revolution profoundly changed the Iranian people and their culture. Persia has been invaded many times over the centuries, but invaders tended to assimilate the magnificent Persian culture rather than imposing their own on Persia. Not this time. Was it because the revolutionaries were insurgents and not foreign invaders? I’m not sure, but it was a compelling question. Plus, the revolution was relatively recent. Fortunately or not, the Iranian revolution has been of the best-covered revolutions in history. Most of us can remember TV news footage of the Shah piloting his plane out of Iran, and the return of Khomeini a few weeks later. It was not difficult to find films, books, articles, and other materials that made my research relatively easy.

The other reason I chose to write about Iran was personal. It’s a strange story, and I still am not sure how I got it wrong. I went to a high school reunion years ago, and one of my former classmates told me how she’d fallen in love after college with an Iranian and moved with him to Tehran before the Shah left. Afterwards her life became difficult and ultimately impossible, and she came back to the States. I decided to fictionalize her story and when it was done, I, of course, called her to let her know what I’d done. When we finally connected, it turned out that she hadn’t gone to Iran at all. She’d gone to India! My first reaction was disbelief…how had I screwed that up? Clearly, it was a subconscious error. After a while, though, I realized it didn’t matter. I’d written the story I was supposed to write.

However it developed, though, it’s never been my intention to write a political screed. For me story trumps everything, but if it can be enhanced by conflicts large and small, so much the better. That’s what I hoped to accomplish in A BITTER VEIL.