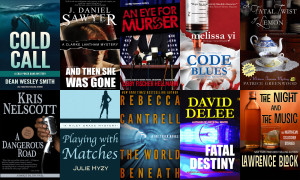 I am thrilled and honored to be a part of a brand new, just-launched crime fiction Box Set… Story Bundle.. or whatever you like to call it. Take a look at some of the authors in this bundle (like Lawrence Block, Kris Nelscott, Rebecca Cantrell, Julie Hyzy, and Dean Wesley Smith) and tell me you don’t want to read them. I sure do!

To tell you more about it, I’m going to turn my blog over to Kris Rusch who curated the set.  Before I do, though, here’s where you can get it. And the best part? You can name your own price! Really.

This bundle comes as close to crime fiction perfection as possible.

When I put the bundle together, I considered various authors and stories. I wanted books similar enough to attract readers (and to allow me to name the bundle), but different enough to provide a sample of the crime fiction genre. (Insiders call “mystery” fiction “crime” fiction because that word is much more accurate.) I also wanted a mix of long-established writers and up-and-comers.

I achieved all of those things and more. This bundle boasts one Grand Master, several award-winners, bestsellers who’ve hit lists like the New York Times and USA Today with multiple books, household names, and writers who’ve just entered the mystery field—sometimes with a bang.

We also have a lot of diversity here. Our investigators include an African American detective, a Canadian doctor of Asian extraction, a disabled stockbroker and a group of retired cold case detectives. Throw in a few amateur detectives, a disgraced ex-cop, a female bounty hunter, and the famous Matthew Scudder, who has appeared in film (most recently A Walk Among The Tombstones), and you’ll encounter the full range of characters the mystery genre has to offer.

I’ve read and loved the work of each and every one of these writers. Some of them I’ve read since I started reading mystery and some I’ve read since before they ever had a book published. In one of my other incarnations, I’m an award-winning editor, so believe me when I tell you that if there were some kind of Kristine Kathryn Rusch Gold Seal of Approval, the books in this bundle would receive it.

For those of you who have never purchased a bundle from StoryBundle before, welcome! StoryBundle makes ordering and downloading these books spectacularly easy.

The initial titles in the Dark Justice Bundle (minimum $5 to purchase) are:

If you pay more than the bonus price of just $15, you get all five of the regular titles, plus these outstanding books:

Our curator, on the authors:

I’m his first reader, and it’s my job to tell him if something’s brilliant or if it needs to go back to the drawing board. Dean writes a several series, but only two make me grab the books out of his hands the moment he finishes them. (And nag him to finish more.) One is the Thunder Mountain series. I think you should look it up now.

The other series? The Cold Poker Gang. I insisted he participate in this bundle with first book in the series, Cold Call. Once you start this series, you’ll become as rabid a fan as I am.

And Then She Was Gone by J. Daniel Sawyer

An Eye For Murder by Libby Fischer Hellmann

When popular mystery writer Libby Fischer Hellman offered the Anthony-Award nominated first novel in her Ellie Forman series for this book bundle, I jumped at the chance. This book travels from Prague in World War II to modern Chicago, Libby’s stomping ground. I discovered Libby through her amazing short fiction which led me to her novels. You get to start with one of her very best novels which will ease you into one of her best series to date.

When I first met Melissa Yi, she was an emergency room physician with dreams of becoming a professional writer. Her writing, including her award-nominated short fiction, has always had power, but she has truly found her niche with the Hope Sze mystery series. Drawing on her personal experiences in the ER in Canada, Melissa has created medical thrillers that shine with authenticity and are impossible to put down.

Another first book in a series (like others in this bundle), Code Blue provides the perfect introduction to a world we often experience, but rarely understand.

A Fatal Twist of Lemon by Patrice Greenwood

There are a lot of mean streets in this bundle, dark stories and creepy villains. Patrice Greenwood provides a respite from all of that. Her Wisteria Tea Room falls into a subgenre that I often find twee—the cozy. Yet Patrice writes a mean cozy, the kind I absolutely love. And I mean “mean” in the best possible way.

Under another name, Patrice is an award-winning western and historical writer. You can see those influences here. She’s also from New Mexico, where this book is set, adding yet another layer of authenticity to A Fatal Twist of Lemon, the first book in this marvelous series.

A Dangerous Road by Kris Nelscott

Full disclosure: I’m Kris Nelscott. In the introduction to this bundle, I promised you high quality work and believe me, I wouldn’t say that about something of mine without some outside confirmation. The Smokey Dalton mystery series has received a large number of award nominations, including the prestigious Edgar Award (mystery’s highest honor) and the Shamus Award (for best private eye novel). A Dangerous Road made the New York Public Library’s recommended lists and several top ten lists when the novel first appeared. And, like so many others here, A Dangerous Road marks the beginning of the series, a series I love writing, seven books down the road

Playing With Matches by Julie Hyzy

New York Times bestselling writer Julie Hyzy is best known for her cozy mysteries, but she writes darker crime stories as well. Originally hidden under a pen name, Playing With Matches bears Julie’s bestselling award-winning name for the first time. Like David D. Lee, and Melissa Yi, Julie first came to my attention before she had ever published a word. Her writing was good then; it’s spectacular now.

I’m hoping Playing With Matches marks the first book in the Riley Drake series. At the moment, the novel stands alone and will, I hope, lead you to Julie’s other marvelous work.

The World Beneath by Rebecca Cantrell

I discovered New York Times bestseller Rebecca Cantrell the old-fashioned way—in a bookstore. The first book in her Hannah Vogel series caught my eye, and boy, oh, boy was it worth the read. Later, we became Twitter pals. Then she introduced Joe Tesla. I’ll be honest: I wasn’t sure she could make this Hannah Vogel fan happy. Yet she did.

The World Beneath didn’t just make me happy. It made other readers happy too. It won the International Thriller Writers’ Best Ebook Original Novel Award and it hit the USA Today bestseller list due to word-of-mouth.

I envy those of you about to embark on your first Rebecca Cantrell novel. I remember my first. Those of you who’ve already encountered her will know what I’m talking about.

Award-winning novelist David DeLee is one of those writers I knew way back when, in the days before he published anything. I thought he’d veer into science fiction. Instead, he’s made a heck of a career as a mystery and thriller writer.

He’s best known for his award-winning Grace deHaviland series, and we’re lucky enough to have the first book in that series to share with you. Grace is a bounty hunter, who takes on some pretty tough clients. I think you’ll enjoy every moment you spend in her company. I know I have.

The Night and the Music by Lawrence Block

I have loved Lawrence Block’s work for decades. Literally. I read my first Lawrence Block novel in the 1970s, and I’ve read many of them since. I won’t say I’ve read all of them, because he has written a lot of books under pen names and some books are just starting to come back into print.

He writes a number of series characters. They appear in both short stories and novels. He’s a master of the short story form, someone I’m still stealing —oops, I mean learning— from. I’ve found that his short work provides the perfect introduction to one of his series character.

He contributed one of his best known characters to this bundle, Matthew Scudder. Scudder has appeared on the big screen twice that I know of, first portrayed by Jeff Bridges in Eight Million Ways to Die, and just last year by Liam Neeson in a Walk Among The Tombstones.

The Scudder books have hit bestseller lists and graced award ballots. The Scudder short stories have received award attention as well. This collection not only lets you sample Scudder stories, it also contains a list of all the Scudder books in order.

In fact you’re all in for a treat. Because once you read the short stories, you’ll move to the novels. I guarantee it.

The bundle is available for a very limited time only, via http://www.storybundle.com. It allows easy reading on computers, smartphones, and tablets as well as Kindle and other ereaders via file transfer, email, and other methods. You get multiple DRM-free formats (.epub and .mobi) for all books!

It’s also super easy to give the gift of reading with StoryBundle, thanks to our gift cards – which allow you to send someone a code that they can redeem for any future StoryBundle bundle – and timed delivery, which allows you to control exactly when your recipient will get the gift of StoryBundle.

StoryBundle was created to give a platform for independent authors to showcase their work, and a source of quality titles for thirsty readers. StoryBundle works with authors to create bundles of ebooks that can be purchased by readers at their desired price. Before starting StoryBundle, Founder Jason Chen covered technology and software as an editor for Gizmodo.com and Lifehacker.com.