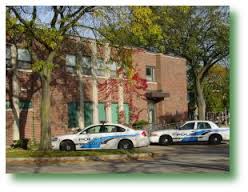 My most recent blogpost was about the shooting in Northfield at rapper Chief Keef’s house. And while we still don’t know a lot of details about the incident, I made some comments about the Northfield police that were—well— kind of smart-ass. And inaccurate.

And because I really admire and like Bill Lustig, Northfield’s current Police Chief, I want to set the record straight. An apology is in order.The inaccurate statement was a comment about a former Northfield Police Chief, whom I said absconded with piles of money in the 1970’s. That wasn’t the case at all. He did nothing wrong while he was Police Chief. After his tenure was over he moved to the south, and things did happen. But nothing illegal went on while he was in Northfield. I’m sorry I got it wrong.

The smart-ass comment was about the police lying in wait on Happ Road to snare speeders. Yeah, they do sometimes, but Bill made what I consider a reasonable response: The police have actually caught burglars who were speeding out of town after robbing someone. They’ve also stopped rolling domestic violence arguments between spouses via traffic stops. Btw, as a parent of two former teenagers, I can think of other reasons to enforce traffic stops. So while my crack might have made for a better story, it was a bone-headed decision.

Bill also talked about closing off Happ Road. I wondered in the blog whether that would have happened in Chicago. He reminded me it does. And I have to confess that despite rumors the road would be closed for days, Happ Road reopened the next morning. So I wasn’t altogether right there, either.

Sometimes I forget that the police have an altogether different attitude toward human nature than we “civilians” do. They only see the dark side, and they are charged with keeping that dark side as much at bay as possible. As a crime writer, I should have known that. I should have been more sensitive.

In fact, there’s only one thing I would have done differently. I wish the police and the Task Force had been more forthcoming about the incident and its status. We all know that in the absence of facts, all sorts of wild theories and gossip fill the void, and we still don’t know much more now than we did last week. I think more disclosure, without compromising the investigation and work of the Task Force, would have helped calmed residents’ nerves.

But for the rest of it… I was wrong.

[Tweet “It’s not easy to eat humble pie. @libbyhellman did it well. “]