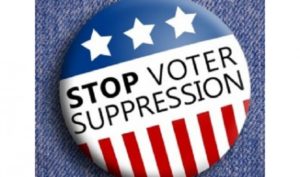 The term voter suppression describes the efforts, both legal and illegal, to stop eligible people from casting their vote. It is not new: voting suppression in the US stretches back to 1838’s Gallatin County Election Day Battle. Today, however, it’s become increasingly heinous and dangerous. In fact, Democratic Senator Chris Coons recently said in Time Magazine: “Too many Americans don’t realize that voter suppression works, and that it has a cumulative, destructive effect on our democracy that builds with every election.”

It’s also important to say that Donald Trump, per se, is not the biggest perpetrator of suppressing the vote. His knowledge of how the system actually is supposed to work is likely quite limited. But that doesn’t mean that both state—the GOP and its dark money funders—and non-state actors— The Koch Brothers plus Russian hackers working with the knowledge and consent of Putin—haven’t done their best to suppress votes. Or that Drumpf isn’t cheerleading those efforts from the Oval Office.

Hours after the election, I told everyone I knew that the Russians stole the election. Not with a massive attack, I maintained. They simply flipped a few votes here, a few votes there, primarily in Wisconsin, Michigan, Pennsylvania, and Florida. Those efforts were just enough to turn the electoral college red. My friends indulged me, but I’m sure they thought I was nursing a huge case of sour grapes. Eight months later, however, it looks more and more like that was the case. At least Esquire seems to think so.

It would be impossible to review all the research and information about voting suppression strategies and tactic in one blog. So what follows are just a few reports and incidents you absolutely, positively need to check out. And bear in mind most of these activities began well before the election.

Which brings us to the far more insidious efforts of election and political officials, all GOP, to suppress the vote before and during the election. Here are just some of the ways this was done. 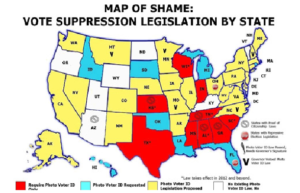 But that’s still not the end of the story. For the first time, new tactics were used during the 2016 election season itself. Many believe they worked. Some were clearly the result of Russian hacking efforts, others were funded by Robert Mercer and perhaps money donated by Russians through the Trump campaign.

Since this post turned out to be quite long, (congrats for making it this far) I’ve broken it into parts. Next time I’ll talk about some of the fixes.