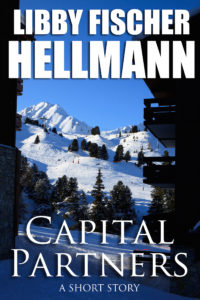 Hi, all. Some of you may remember my short story “Capital Partners,” which came out a few years ago. It was published in the WRITES OF SPRING anthology, edited by the late Gary Schultz and Pat Frovarp, who also owned Once Upon A Crime, that wonderful bookstore in Minneapolis.

As time went on I couldn’t get the characters in Capital Partners out of my mind. So I decided to expand the story (at least in my mind) and write a TV pilot. I had a great time doing it — again, as some of you know, I used to work in Film and TV, and the process was like “coming home.” So, just for fun (and maybe profit — who knows?), here are the first 10 pages of the script. Let me know what you think. And enjoy!

First, the logline: When two women who dislike each other find out their husbands have been running a Ponzi scheme and owe millions to the Mafia, they put their differences aside to get their money back. However, along the way they discover they are being stalked by an unknown cyber-espionage organization.