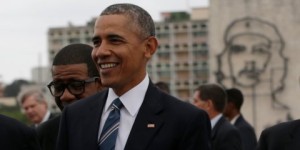 Late Night talk show host Seth Meyers nailed it with his take on the politics behind this week’s photo or gaffe, if you will, of Obama in front of a giant outline of Che Guevara in Havana. Who knew Obama was such a huge fan of Urban Outfitters?

It could have been a whole lot worse. A host of luminaries have gone a step further, actually shaking hands with some of the world’s worst dictators, despots, oppressors, totalitarians, oligarchs and tyrants.  These put Obama’s photo, which has caused outrage amongst a hyper-sensitive (or just mischief-making) few, in perspective. 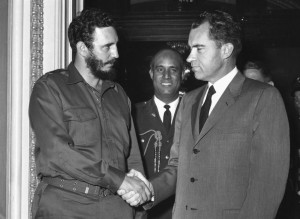 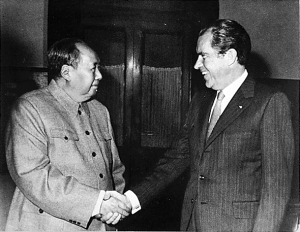 Nixon, serving under Eisenhower, did the dirty in 1959, shaking hands with Fidel Castro, who went on to murderer of as many as 70,000 of his own countrymen. Nixon did it again in the seventies, shaking the hand of Mao Zedong, leader of the brutal Chinese regime that killed somewhere between 40-70 million of its own people through a winning combination of starvation, forced labor and executions. (At least Nixon was wearing a different suit.)

In 1983 President Reagan and the Zairian president Mobutu Sese Seko met, a man who was responsible for many thousands of civilian deaths. The US president praised the despot for giving his political opponents amnesty. Mobutu thanked Reagan back for his support. Much of the world cringed.

Henry Ford apparently met with the Chilean dictator Pinochet, and Secretary of State Henry Kissinger openly supported the dictator, who was thought to have been at the root of as many as 30,000 deaths. And JFK shook hands with the Sha of Iran in April 1962, a man responsible for the deaths of thousands of innocent Iranian citizens. 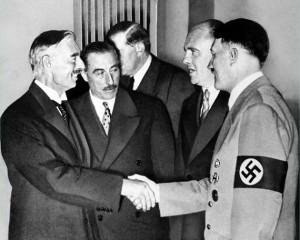 The ill-advised British Prime Minister Neville Chamberlain shook hands with the ultimate dictator and human monster Adolf Hitler in a doomed effort to stop the Second World War happening. And in July 1945 Joseph Stalin, Winston Churchill, and Harry Truman shook hands at Potsdam, Germany, in a meeting to decide how to manage post-war Europe. Stalin was responsible for an awe-inspiringly horrible 30 million deaths.


Jimmy Carter shook hands with Palestine’s Yasser Arafat as well as the Egyptian leader, Anwar Sadat. In 1977 Carter also shook the hand of the then Shah of Iran, describing the leader as an ‘island of stability’. 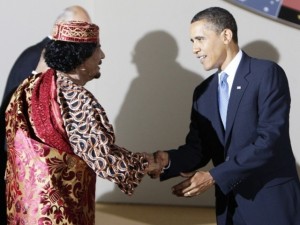 November 19th 1985 saw a legendary shake between President Reagan and the Soviet leader Mikhail Gorbachev, marking the first meeting of the nations’ leaders for six years. And in February 2016 Mr Obama  hosted a gang of south east Asian dictators in Southern California, including leaders of repressive regimes Hun Sen from Cambodia, Prayuth Chan-ocha from Thailand, Najib Razak from Malaysia, Hassanal Bolkiah from Brunei, Thein Sein from Myanmar, Choummaly Sayasone from Laos and Nguyen Tan Dung from Vietnam. No doubt he shook hands with them all. And President George H. W. Bush was photographed with a giant-size photo of Mao Tse-tung.

It’s funny how powerful a handshake is and how much offense it causes .