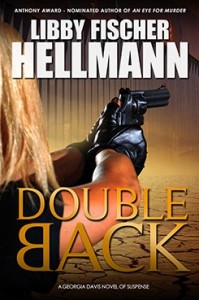 As some of you know, my 6th novel, Doubleback is on sale this week at Amazon for 99¢/.99£. I thought you might like to hear some of the backstory — why and how this book came to be. It was published in 2009, but I’d been thinking about it for a while. Especially the first chapter.

You see, people who know me well know I’m slightly neurotic. Some of my primal fears are flying, bees, and being trapped in a stalled elevator.

So, of course, I imagined 6 people in a downtown Chicago office building elevator that lurches to a stop somewhere around the 57th floor. The lights go out, the car sways, and panic ensues – people cry, curse, pray and yell. They think they’re going to die. Suddenly the elevator resumes operating and descends to the lobby as if nothing has happened. The people spill out, and the last man out looks at his watch and says, “Right on schedule.”

That’s the first chapter of Doubleback. Now all I needed was the rest of the book. At the time I started writing, Blackwater (now called Z) was all over the news. Eric Prince, Blackwater’s CEO,  was saying his mercenaries weren’t exactly military, so they shouldn’t be accountable to military law. Then he said they weren’t really civilians either, so they shouldn’t be accountable to civilian law. It was a Catch-22 and it infuriated me. So I decided to incorporate that into the story. What if mercenaries, who are up to the highest bidder anyway, changed sides? What would happen? How would you detect it? How would you fight it?

Finally, I knew I wanted to bring together both my series protagonists: video producer Ellie Foreman and PI Georgia Davis. They are completely different people — Ellie will go to lunch with you and give you TMI about her life, and she has a solid support and family life. Georgia, on the other hand, won’t go to lunch with you at all. She’s a loner, she has baggage, and she’s very cautious about  people. Still, I was curious to see how they’d end up working together (They worked together in An Image of Death but Georgia was still a cop at the time.) now that Georgia was a PI. I liked the result.

I hope you do too.

In case you havent seen it here’s the video trailer. Enjoy.