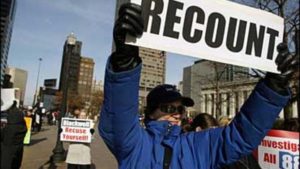 A group of respected computer scientists have spotted a serious anomaly in voting results in Wisconsin, Michigan, and Pennsylvanis, and they say it warrants an audit.

The story started in May, when the Democratic National Committee discovered suspicious behavior on its computer network. It called in the security firm CrowdStrike, who found two hacker groups lurking on the system, one of which had been there more than a year. The hackers had targeted the network’s communications and were busy researching opposition candidates, according to ex-FBI man Shawn Henry, now chief security officer at Crowdstrike. He attributed the hack back to the Russian government, who he says were, “involved in an espionage campaign – essentially collecting intelligence against candidates for the US presidency.”

The voting irregularities dogging the election results span the three critical battleground states mentioned above. Apparently Hillary Clinton attracted 7 percent fewer votes in counties relying on electronic voting machines compared with traditional optical scanners and paper ballots. 7% may not sound like much, but in a landscape where every vote counts, the aggregate vote count of around 55,000 could have swung all THREE states to Clinton, giving her the Presidency. Computer scientists have called for a recount in all three states and, apparently, Clinton’s team are actively discussing the situation. But they only have until Friday to decide whether to file a suit for an audit.

The computer scientists include J. Alex Halderman, Director of the University of Michigan Center for Computer Security and Society, a highly credible expert who knows his stuff. He believes Clinton’s unexpectedly poor performance in some counties reveals a highly questionable trend.

Halderman and John Bonifaz, the attorney interested in bringing the case, first reported their suspicions in  New York magazine. As the group told Podesta and Elias, they haven’t found any real evidence of a hack… yet. But the strange pattern that emerged was unusual enough raise alarm bells and certainly merits an independent third-party review.

Let’s put it this way: If Trump was on the receiving end of this news instead of Hillary, what do you think he would be doing right now?